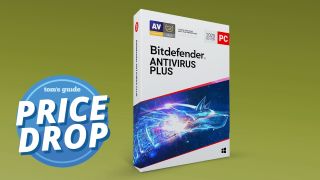 Many antivirus makers are having sales for Black Friday, and Bitdefender is no exception. You can grab Bitdefender Antivirus Plus, our top pick for entry-level antivirus product, for nearly 60% off its regular price.

Bitdefender Antivirus Plus is currently $24.99 for the first year, a markdown of $35 from what you'd normally pay. You'll be able to protect up to three Windows PCs with excellent malware detection and fast and light scans, plus a lot of extra features.

Bitdefender Antivirus Plus: Was $60, now just $25 @ Bitdefender
Our top pick for entry-level antivirus software is steeply marked down at the Bitdefender website. The discount covers your first year of service for up to three Windows PCs.View Deal

Bitdefender Antivirus Plus gets our top rating for antivirus software because it has a ton of features for an inexpensive product, including an unlimited password manager, a Wi-Fi network scanner, a file shredder, a hardened web browser and Bitdefender's new Anti-Tracker feature.

This three-device deal is the perfect antivirus solution for a couple or small family who don't have young children old enough to go online. It includes VPN client software for anyone wishing to try out Bitdefender's VPN service as an add-on.