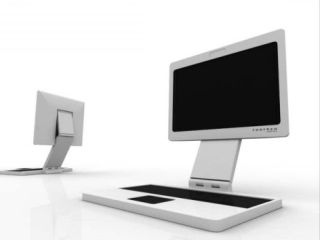 So that's why our necks have been hurting! Apparently spending the whole day slouched over a laptop is ergonomically unsound. That fact even applies to large desktop replacements that have bigger and easier to read screens.

Laptops simply don't orient their displays high enough to create an optimum viewing angle. Conventional ergonomic wisdom says that you should be looking slightly down while working in front of a computer (along with maintaining proper posture and the like). Yet many laptop users find themselves looking down significantly, simply because the display's hinge is too close to the working surface.

The solution of designer Vincent Liew? Put on the laptop display on a telescoping three-hinge arm. The special arm allows the user to position their screen high and far enough away for optimum viewing and the entire contraption slides into the back of the display when not in use.

It's a great idea, especially if the joints can be engineered for maximum durability and minimum looseness caused from sustained use. It would also be pretty cool to bring a heavy gaming laptop to that next LAN party, snake the display out from the main unit, and look like you're playing on a bonafide all-in-one desktop.

Obviously, as a concept, Liew's design has no scheduled market implementation. Expect updates if that changes though!