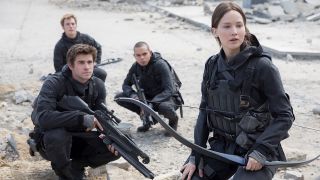 The last time I fired up Steam to play some games and browse sales, I noticed something peculiar. Crammed between popular new releases and hit indie games was a huge banner that invited me to buy a bunch of Lionsgate movies on Steam — a marketplace known mainly for selling oodles of PC games. But just because you can watch The Hunger Games and American Psycho on Valve's mega-popular game client doesn't mean you should.

For starters, the 70-movie selection offered by Lionsgate isn't all that stellar. There are a few genuine classics (Reservoir Dogs, American Psycho, Requiem for a Dream), and you can watch franchises like The Hunger Games, Divergent and Twilight in their entirety. But the roster of movies is largely padded by junk like War, Crank and Leprechaun: Back 2 Tha Hood. There's plenty here for horror fans (Saw, The Cabin in the Woods), but don't expect to watch Star Wars or The Avengers on Steam anytime soon.

There's also the issue of value and convenience. Most movies on Steam cost $4 or $5 for a 48-hour rental. That lines up with services like Amazon Video, but Steam gives you no option to own those films. I could rent The Hunger Games: Catching Fire on Steam for $3.99, but I can also own it forever on Amazon for $9 more. I could also get a Netflix streaming subscription for as cheap as $7.99 per month and stream Reservoir Dogs, Kill Bill and the thousands of other shows and movies.

But the biggest issue with Steam movies is the fact that you're stuck watching them on your PC. Steam's built-in video player works just fine, but there's no way to watch your rentals on a mobile device, set-top box or game console. Just to be sure, I fired up the Steam mobile app, which didn't even acknowledge that Catching Fire was in my library. Unless you have your PC connected to your TV (or own a Steam Machine), you'll probably want to watch your films elsewhere.

Steam offering big-budget movie rentals certainly doesn't hurt the service, but it also doesn't add much to it. While Steam has plenty of gaming-centric films worth checking out (including documentaries on professional Counter-Strike and Dota 2 players), you're better off sticking with places like Amazon to get your blockbuster film fix. Valve's marketplace is already the best at what it does: offering millions of great PC games with frequent sales. There's no need for it to try and become the next Netflix.