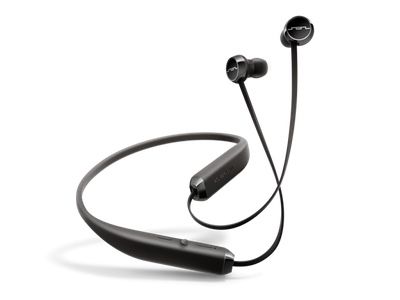 When you see someone with their ears covered by bulbous cans emblazoned with the round, Bauhaus-esque "b," you know you've found someone wearing Beats. Soon, you'll be able to recognize the Sol Republic Shadow wireless earbuds in a similar way — by the company's ultra-slim and minimalist logo on the circular buds that hang around necks like a piece of jewelry. But there's more to the Shadows than looks. At $99, these earbuds also deliver when it comes to audio quality.

With their smooth design and metallic accents, the Sol Republic Shadow wireless earbuds mimic jeweled accessories. My review unit was milky white, accented with rose-gold hardware on the tips and buds. The buds, which also come in a black-and-steel color combo, dangle from thin cords that are attached to the more structured neck strap.

Evoking the chic design of the original Parrot Zik headphones, the Shadow's buds feature traditional ear inserts and a flat-disk back. A strip of rose gold encases the circular earbud backs, and a similarly colored Sol Republic logo sits in the middle of each disk. While these buds might not pass for actual jewelry, they look more fashionable than most wireless earbuds.

The neck strap is unique because the middle is very bendable, allowing it to sit comfortably against the back of your neck. The rigid ends hold the controls: A multi-function button and the volume rocker are on the top right side, and the power button and indicator light are on the bottom. The left side holds a microUSB port for charging. These buds are water resistant, which means they can take a few splashes, but not much else.

The Sol Republic Shadow wireless earbuds come with three different sizes of ear inserts. The largest versions fit snugly into my ear and sealed out most background noise. I couldn't hear weights dropping in the gym while I worked out, but the faint roars of passing subway trains when I was commuting did come through.

The natural-fit collar design was just secure enough to stay put around my neck, but flexible enough to move with me as I turned my head, leaving the buds undisturbed. Compared to the $129 SMS Audio SYNC by 50 Wireless and $179 Jabra Sport Pulse, the Shadow wireless buds were the only ones I left around my neck all day long, even when I wasn't listening to music.

The Sol Republic Shadows have balanced audio that brings out the best parts of every track. The powerful underlying bass in Justin Timberlake's "TKO" resonated through the whole song. The highs in "Heavy Crown" by Iggy Azalea and Ellie Goulding were pronounced throughout the entire track. I could hear the slight raspiness in Goulding's voice in her chorus and bridge, too.

Bass was more pronounced in some songs than others. For those who favor consistently powerful lows, the SMS Audio SYNC by 50 Wireless earbuds offer a steady stream of thumping bass. However, you'll get more-balanced highs and mids in the Shadows. The Shadows outperformed the $59 Plantronics BackBeat GO 2 wireless by playing the same tracks with stronger, deeper and more balanced sound.

The truest competition for the Shadows comes from the Jabra Sport Pulse wireless earbuds, which offer similarly balanced sound but slightly stronger bass. To justify their $179 price, the Jabra earbuds also come with an embedded heart rate monitor — but it's not the most accurate.

The Sol Republic Shadow wireless earbuds come with dual-device connectivity, meaning you can pair the buds to two devices at once. With two paired, say a smartphone and a tablet, you can switch back and forth just by playing and pausing music on either one. This feature didn't work on the first pair of Shadows, but on a second pair, playback was nearly seamless as I switched from playing Sam Hunt on my iPhone to listening to Louis C.K. stand-up comedy on my friend's iPhone.

I went for three days of 1-hour-long workouts and 2-hour commutes with the Shadow wireless buds before they got low on juice. When the battery was dying, a voice interrupted my workout playlist to tell me to charge.

Sol Republic's Shadow wireless earbuds shine a beautiful light on music and style. Not only do they offer great audio quality, but they also have a minimalist-chic design that's worthy of a permanent spot around your neck.

The $129 SMS Audio SYNC by 50 Wireless earbuds are more secure and provide superstrong bass that gets the blood flowing. But all in all, the $99 Sol Republic Shadow wireless earbuds provide the best value, and looks, among wireless headphones.