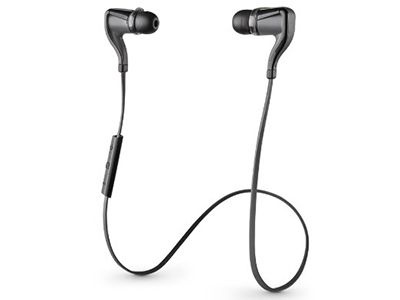 The Plantronics BackBeat Go 2 wireless earbuds are inexpensive music makers with good audio quality and a supersecure fit, but they could use longer battery life.

Plantronics' BackBeat Go 2 do exactly what a pair of wireless earbuds should do: free you from the cords that keep you tethered to your smartphone, offer good audio in a comfortably secure design and do so at a great price. Although they have their faults, the $59 BackBeat Go 2 are well-made wireless buds that won't break the bank.

The Plantronics BackBeat Go 2 earbuds look slimmer than other wireless earbuds I've tested. They have wide, flat backs that taper into torpedolike buds. Gripping the buds like a choker are "stabilizers," which lie flush against the side of the buds and take the place of traditional ear wings.

A flat cord connects the buds, interrupted by the inline remote on the right side. The remote has volume up and down buttons, which also let you skip songs. There's also a multifunction button for turning the earphones on and off and activating voice commands. The back of the right earbud has a flap of silicon that hides the micro-USB port for charging.

The BackBeat Go 2 have a protected and superlightweight design that makes these earbuds easy to leave dangling over your neck throughout the day. The entire device is coated in P2i moisture protection, making it sweat- and water-resistant.

One of the best design elements of the BackBeat Go 2 is audible rather than aesthetic. When you turn on the earbuds, a female voice announces whether the power is on, if the earbuds are connected to a device and the battery level.

Out of the three, the battery information is key. Other wireless earbuds, like the $99 Sol Republic Shadow, only tell you when the battery is low and in need of charging. This notification from the BackBeat Go 2 makes it easier to avoid sudden earbud death.

Three different sizes of ear inserts come with the Plantronics BackBeat Go 2. I went with the largest because they felt most comfortable and secure in my ears.

I was hesitant about the stabilizers at first because I'm used to ear wings hooking onto the top parts of my outer ear. However, I was pleasantly surprised — the stabilizers act as nearly invisible hooks, but for the back part of your outer ear. They were easy to adjust, and once I got the right fit, it was like they weren't there.

While the buds feel just as secure as the Sol Republic Shadow earbuds, the added grip from the stabilizers made the BackBeat Go 2's feel nearly impervious to inadvertent pulls.

I also appreciated the distinctive icon buttons on the inline remote. Compared to the short protrusions on the Shadow buds, the plus and minus symbols on the BackBeat Go 2 were easy to navigate by touch alone. This made it easier to find the square multifunction button when I wanted to turn off the headphones after a workout.

On the Plantronics BackBeat Go 2, Meghan Trainor's "Dear Future Husband" sounded exactly as it should: bouncy and poppy, with clear, melodious mids.

Listening to Jason Derulo's "Get Ugly" on these earbuds while working out really pumped me up and got me to run a little faster. The beat was clear and punchy, and Derulo's Michael Jackson-esque high notes were crisp. I kept the volume at between 50 and 75 percent, and the BackBeat Go 2 blocked out all the ambient noise from other gymgoers.

However, I wasn't impressed by Carrie Underwood's "Blown Away." Her vocals were clear, but they didn't come off as powerful as they did when I listened on the Sol Republic Shadow. The lows were also weak, hiding behind the mids throughout the track.

In Ludacris' "My Chick Bad," the vocals were loud and clear, but the lows sounded weak. I felt like I was actually in the club when I listened to the same track on the Sol Republic Shadow.

Plantronics promises 4.5 hours of listening time on the BackBeat Go 2, and I found that claim to be accurate. After two days of 1-hour workouts and two 1-hour commutes to and from work, the earbuds told me they were low on power.

For on-the-road convenience, Plantronics sells the BackBeat Go 2 with a red-and-black charging case that can give you an extra 14 hours of play time. It has a built-in battery that you can charge up before you go on a day trip and use to juice up the earbuds when needed.

The $59 Plantronics BackBeat Go 2 wireless earbuds are a strong value-priced option. They're light around your neck, with ear inserts that stay put during exercise, and they offer good overall sound quality. However, for $40 more, the Sol Republic Shadow wireless earbuds offer more powerful bass and a premium design. But if you want to spend less, the Plantronics BackBeat Go 2 are solid, inexpensive wireless buds for people who are always on the go.