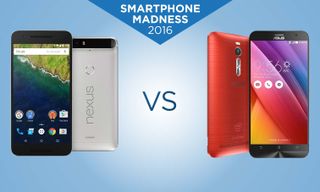 Editor's Note: Voting in this round has ended, and the Nexus 6P and 5X can both breathe a sigh of relief. The Google phones held on for a win after a late push by the Asus ZenFone 2 gave us a final tally of 52 percent to 48 percent in favor of the Nexus 6P and 5X. Those phones will take part in the quarterfinals later this month, as voting in the first round continues.

Smartphone Madness moves to a budgetary battery in our third match-up, with phones that pack in more features than you might expect at such price tags. But which offers the most bang for the buck: Google's Nexus 6P and 5X phones or the ZenFone 2 from Asus? That verdict is up to you.

At $499, the Nexus 6P is the priciest of the bunch, though its premium design and sharp screen are the kinds of things you typically find in much more expensive models. We're particularly impressed by 6P's 12 hour-plus battery life and its very capable camera. If $499 is still too rich for your blood, the $299 Nexus 5X also offers long battery life and a pure Android experience like the 6P, even if it does make some design trade-offs.

Like Google's phones, the ZenFone 2 has a few tricks up its sleeve that you wouldn't expect from a phone with a $299 price tag. A 64-bit CPU and 4GB of memory provide the kind of performance you'd expect from a much pricier model, and its advanced camera modes improve upon an otherwise basic auto features. It's an impressive package, though the ZenFone's fast-draining battery could prevent it from making a deep run in our tournament.

You have until 9 a.m. ET tomorrow (March 16) to vote for the phone you think delivers the most compelling features for the price. The winner joins the Galaxy S7 and S7 Edge in the next round. It was a narrow victory for Samsung's newly released flagship phones over the HP Elite X3, with the Galaxy S7 capturing 54 percent of the vote.