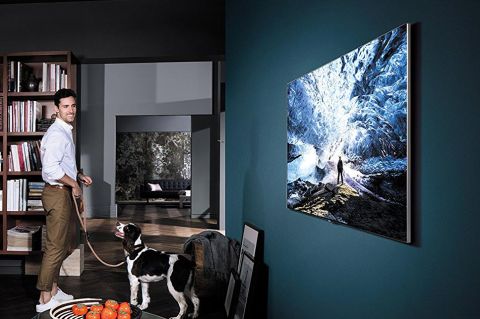 Buy Samsung's Q7F QLED if you want a TV that achieves the best balance of vivid colors and brightness for a reasonable price. This 4K HDR set also does a fine job of rendering shadowy details, but it lacks the deep, dark blacks of more expensive OLED TVs.

If there were an award for "most improved" in the big-screen-TV category, Samsung's 65-inch Q7F would be the winner. The 4K HDR (high dynamic range) set builds on the company's older and already impressive KS9000 model with better viewing angles and improved brightness — and it costs about $1,200 to $2,200 less than competing OLED models from LG and Sony.

Because Samsung's Q7F ($2,797 as tested) is confusingly branded as "QLED," some buyers may think it bears some relation to OLED (organic light-emitting diode) TVs. It does not. Samsung's Q7F is actually an LCD TV that uses a quantum-dot layer to deliver enhanced colors and improved brightness, which are part of the HDR format. The "LED" part of QLED refers to the type of backlighting that the LCD display uses.

Because of its edge-lit LED arrangement, the Q7F can't achieve the deep blacks of OLED sets. On the other hand, the Q7F can reveal subtle details in shadowy scenes — something OLEDs often miss.

The Samsung Q7F boasts what the company calls a "360 design," which means its curved and attractively etched backside doesn't have a lot of ugly cables hanging off of it. Consequently, you can put the set on a tabletop in the center of a room without revealing unsightly protuberances.

To accomplish this, Samsung tethered a single, nearly invisible, translucent cable to a separate external box called the One Connect, which houses all of the necessary connections. The external box includes four HDMI ports, three USB connections, and Ethernet and RF plugs. The entire TV rests on a center pedestal with a chromed, V-shaped base. It's flashy but fashionable.

The Samsung Q7F is a 4K (3840 x 2160-pixel) set with HDR, including support for Ultra HD Premium (the industry phraseology for basic HDR compatibility). Unlike the latest sets from LG, Sony and Vizio, it doesn't support the proprietary Dolby Vision HDR format. Instead, Samsung is pushing yet another HDR format: HDR10+. So far, only Amazon is backing Samsung by offering compatible content. The importance of the HDR-support differences will depend on how much Dolby Vision content comes out in the future. In the meantime, the Q7F still delivers an impressive picture that works with most current HDR fare.

In 4K HDR versions of The Martian and Mad Max: Fury Road, the Samsung Q7F demonstrated that it can reveal subtler details and colors that LG's E7 OLED TV sometimes ignores. While it lacks the deep blacks of the OLED competition, Samsung is more concerned with delivering details in shadows.

When the Q7F is in its best preset mode, Movie, you can clearly read the logo on the commander's spacesuit in the opening Martian storm sequence — something you can't really make out in the LG set. In Mad Max, when the evil leader walks through a tunnel, LG's OLED crushes the black levels and contrast so you can't see the ribs around the tunnel, whereas Samsung's set does a good job of revealing them without creating any banding distortion.

On the other hand, when the two TVs are viewed side by side, it's clear that the Samsung Q7F cannot produce the deep blacks that the OLEDs from LG and Sony can display. The Q7F's overall picture can appear gray by comparison, and even stark-white elements sometimes look a bit dingy.

In our lab tests (using an X-Rite i1 Pro connected to CalMAN software, and with the test pattern set to cover 10 percent of the screen), the Samsung set, in its best mode (Movie), produced 97.3 percent of the Rec. 709 color space, which was better than the LG E7's 92.8 percent. Sony's Bravia XBR-65A1E turned in 107.5 percent, which made some colors look punchier.

The Samsung Q7F's colors were more accurate than those of the LG or Sony sets. The Samsung Q7F turned in a Delta-E score of 1.4, compared with 2.3 for the LG and 1.5 for the Sony. (Scores closer to 0 are better.)

In a brightly lit room, Samsung's Q7F LCD fared better on overall brightness, as confirmed by our benchmarks. The Q7F notched a peak brightness of 1,008.5 nits, compared with 684 nits for the Sony Bravia and 446 nits for the LG E7. However, OLED sets tend to make up for this difference with better contrast.

The latest quantum-dot generation also appears to have improved the set's horizontal off-axis viewing. There's still some loss of brightness as you move from side to side, but nothing like the washed-out effect you got when you moved out of the center sweet spot on the previous generation of Samsung sets.

Watching upscaled Blu-ray and HD content on the Samsung Q7F was a generally positive experience. There weren't any obvious distortions, even with rapid action scenes that required more video processing. And the Q7F was able to render details, like a rich field of stars, without sacrificing too much contrast. The exceptions were in scenes with flashing spotlights, which produced some slight haloing around objects due to the edge-lit LED lighting design.

Audio: Punchy but not the best

The Q7F produces a rounded, midrange-dominated sound. The built-in sound system produces plenty of volume and enough bottom-end punch for explosion-filled soundtracks (it's Dolby Digital Plus and DTS Premium compatible). The sound isn't as expansive as that from LG's E7 — for example, Emily Haines' vocals sounded muffled on Metric's "Gold Guns Girls" — but it's better than what most of the competition offers.

We still love the option  to pair wireless Bluetooth headphones to the Samsung set for nighttime viewing that won't disturb the neighbors.

Samsung's bespoke smart-TV interface is laid out logically while remaining understated. With a touch of the remote's home button, a straightforward list of options appears along the bottom of the screen. When you select an input or feature, a second row of labeled icons above changes automatically to reflect relevant options. The software supports all the major streaming services (such as Netflix, Amazon and Vudu), can recognize a variety of connected gear (including the latest Blu-ray players and older cable boxes), and works in conjunction with Samsung's SmartThings hub.

Unlike on Amazon's Fire TV Edition, voice and text searches work only across streaming services, not broadcast channels. Cord cutters should note that the Samsung Q7F also works well with HDTV antennas, with a sensitive built-in tuner, good upscaling and an easy-to-follow electronic program guide.

Although Samsung hasn't changed the minimalist layout of the remote control since the previous version, the company has beefed it up with a flat, metal, wand-style chassis. After complaining in the past about the remote's paucity of dedicated buttons, I've become accustomed to its peculiar arrangement of tiny chrome bars that toggle up and down to make adjustments.

It does present a learning curve, especially if you use Samsung's remote to control other equipment, such as a Blu-ray player or Roku box, but once you've mastered its controls, you'll appreciate its simplicity (or perhaps you won't).

Samsung continues to improve its top-of-the-line 65-inch set, which boasts a balanced picture that can reveal details even in the dark corners of images. The Samsung Q7F still cannot deliver the inky blacks of LG's E7 or Sony's A1E OLED TVs, but it costs considerably less than either of those 4K sets and delivers an impressive picture in a striking design.