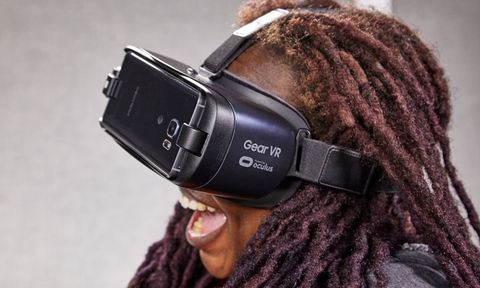 The updated Samsung Gear VR delivers a more immersive experience with even more high-quality games and apps, all in a sleeker, more comfortable headset.

Following last year's launch, the Samsung Gear VR quickly established itself as the top mobile virtual-reality device — so much so, that an army of clones rose in its wake. Now, Samsung has raised the bar even higher with a new model that keeps the same $99 price but adds a wider field of view and other upgrades, including USB-C support for the Galaxy Note 7.

Google's Daydream headset looks pretty promising, but at least for now, Samsung and its partner, Oculus, offer the best VR option around.

Design: Samsung's got the blues

After setting the standard for white-on-black VR headsets, Samsung flipped the script and used the midnight-blue shade that the company normally reserves for its laptops. The blue-black hue helps the Gear VR boldly stand out from all the clones on the market. Still, I would love for Samsung to roll out different colors of the Gear VR to correspond with the manufacturer's current phones. Just imagine how cool a blue-coral headset would look.

And just to be clear here, I don't wholeheartedly use the word cool to describe the Gear's look. It's still weird watching people using the headset out in public. Hell, I look at some of my pictures wearing the device and get a good laugh. But compared to the competition, the Gear VR is by far the sleekest mobile VR headset in the land.

Samsung also made a few functional tweaks to go along with the aesthetic changes. The company ditched the concave touch navigation pad located on the right of the device, returning to the smooth, slightly recessed surface of the Innovator Edition. Directly above the touchpad sits the Back button as well as the Home key, which is a new addition. Previously, you accessed the Home screen by holding down the Back button for 2 seconds. The volume rocker located toward the front of the Gear is also a new innovation.

A USB Type-C port sits on the bottom right of the device with a pair of air vents to help your smartphone stay cool. The focus wheel remains at the top center of the headset, just in front of the bar that secures one of the Velcro-lined headbands.

Your smartphone still resides in the front recess of the Gear VR. I'm happy that Samsung got rid of the shiny exterior plate that hid your smartphone; that's one less part to worry about. The headset does come with a Samsung-branded plate that protects the front of the biconvex lenses, but it easily pops out when you pull back the left clasp holding the plate in place.

MORE: Samsung Gear VR: Everything You Need to Know

Similar to its predecessors, the Gear VR is dependent on headphones to deliver audio. Barring that, you're relying on your phone's bottom-firing speaker to deliver 360-degree audio, and that's just not happening.

When you first unbox the new Gear VR, you'll notice that it has a USB Type-C connector. That's fine if you own a Samsung Galaxy Note 7, but you'll have to plug in the bundled adaptor if you have a phone that uses micro USB.

Switching adapters is pretty simple and takes about 10 seconds. Once you have the proper adapter in place, the new Gear VR can be used with the Galaxy S7, S7 Edge, S6, S6 Edge, S5, Note 5 and Note 4.

Thanks to a wider, taller space for your face, the new Gear VR distributes the weight and pressure better than the original did. The extra real estate will also make it easier for folks who wear glasses. Once I adjusted the straps, the headset slid easily into position over my eyes. I wore the Gear VR comfortably for nearly 2 hours. Best of all, when I took off the device, it didn't leave a telltale imprint on my face.

Neither Samsung nor Oculus has yet to find a way to add an integrated audio system into the Gear VR. As a result, I had to rely on the Note 5's bottom-firing speaker if I didn't have a pair of headphones plugged in. It's an inelegant solution that continues to deprive the wearer of the 360-degree audio that's integral for a truly immersive experience.

However, I was pleased to see that I could use my wireless V-Moda Crossfade headphones with the new Gear VR. By comparison, with the original Gear headset, wireless headphones triggered a bug that would greatly distort the audio quality.

Aside from the color swap, the biggest change to the Gear VR is the larger field of view, which increases from 96 degrees to 101. This might not seem like a huge change, but those added degrees put the Gear VR closer to the likes of the Oculus Rift and HTC Vive, which have 110-degree fields of view. Don't get me wrong, though; the Gear VR is by no means on a par with either PC-powered device.

Watching the updated Invasion short, I felt more immersed in the wintry scene compared to my experience with the original Gear VR. The wider angle forced me to be more precise with my gaze, which made for crisper viewing, especially when it came to text.

As nice as the view is in the new Gear VR, it still suffers from blurring along the edges. It's a small problem at best, one that's fixed by looking in the direction of the blurring. But I'm hoping that we'll get to the point someday soon where Samsung and Oculus can keep the entire image in focus.

Thanks to Samsung's partnership with Oculus, the Gear VR is at no loss for new content, boasting hundreds of apps, with more launching monthly. Similar to when the Gear VR first launched, apps range from free to $14.99 and cover the gamut from educational to entertainment, gaming and social.

One of my favorite apps, Guided Meditation VR (free), transported me to one of four exotic environments with 25 meditation guides that help me find balance on some of those more hectic days.

I had a blast hacking and slashing my way through wave after wave of killer robots as my character smashed and flipped her way to victory in Smashing the Battle ($9.99). And even though I lost more matches than I won during Wands' ($5.99) competitive duels, I'm eager to get back in the game and earn some more powerful spells to fling at my foolish challengers.

In terms of searching for apps on the smartphone version of the Oculus Store, I'm happy to report that there's been marked progress. Someone had the good sense to roll out a search feature, instead of making me scroll through endless columns of apps. The Summary Details and Update pages found in the headset iteration of the store are condensed into easy-access drop-down sections on your phone.

I'm not sure if it's due to the more powerful phone, the larger air vents or a combination of the two, but the Note 5 stayed relatively cool as I fell deeper down the virtual rabbit hole. After I spent about an hour playing games and watching movies in VR, the phone measured 98 degrees Fahrenheit, which is warm, but not scorching. Even though I was playing some taxing games, I never once encountered the overheat message that signals it's time to give your phone (and possibly your eyes) a break.

Since it still relies on your phone's processor, display, cameras and batteries, the Gear VR remains a battery killer. However, if you're using some of the newer phones in Samsung's Galaxy line, you won't have to worry about it too much. The Note 5's 3,000-mAH battery dropped to 72 percent after 45 minutes of use with the Gear VT, compared with 66 percent on my Galaxy S6's 2,500 mAH-battery.

When it launched back in 2015, the Samsung Gear VR immediately rose to the top of the pile as the best mobile device for virtual reality. A year later, Samsung didn't reinvent the wheel — they just refined it, adding a sleeker, more comfortable design and a wider field of vision, all for the same affordable price of $99. Samsung and Oculus also gave the app store a much-needed revamp and continue to support the hardware with a growing library of compelling, high-quality content.

If you don't own a Samsung device, the next best thing would be the Zeiss VR One. For $129, you get augmented reality features in addition to VR. However, Zeiss' Google Cardboard-dependent library pales in comparison to the Gear VR's Oculus-powered cache. If you're looking for just a VR-viewer of sorts, I'd suggest the $15 Google Cardboard. The big question mark is Google's Daydream headset platform, which is expected to launch this fall.

For now, the Samsung Gear VR remains the undisputed king of mobile VR. It's a must-have device for Samsung owners who want a great VR experience without shelling out hundreds of dollars on a high-priced headset and gaming PC.