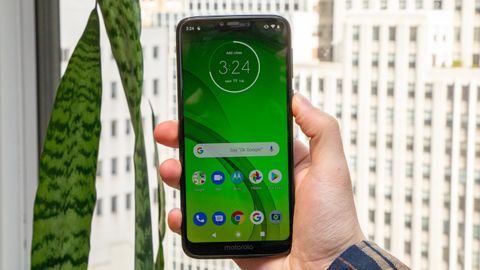 The Moto G7 Power may be the middle child in the family, but it also happens to be the best cheap phone in Motorola's lineup.

While the Moto G7 is a very versatile $299/£240 phone that can satisfy all your basic needs, its battery life is mediocre. Motorola's recently released bargain made it less than 9 hours on our battery test, an underwhelming performance.

Although you have to accept some trade-offs to get those several extra hours of freedom, don't be fooled by this phone's bargain price. The G7 Power is one of the best cheap phones you can buy and the secret star of the whole G7 family.

Updated April 26, 9:31 a.m.:The Moto G7 Power is headed to T-Mobile and Metro by T-Mobile stores. You can find more information in the Price and Availability section of this review.

As of April 29, the Moto G7 Power is offered in-store at T-Mobile and the Uncarrier's prepaid subsidiary, Metro by T-Mobile. It retails for $237.50, which breaks out into $9.50 a month if you opt for an estimated installment plan over 24 months.

The Moto G7 Power comes in just one color, Marine Blue, and one configuration, containing 32GB of built-in storage and 3GB of RAM. You can expand that through the use of a microSD card for up to another 512GB of space for apps, games and media.

Design: Big with a notch


Motorola has given all of its latest G-series handsets the notch treatment. But unlike the regular Moto G7, with its teardrop design, the G7 Power adopts a more conventionally styled notch, with the earpiece and selfie camera front and center — similar to what you'd find on one of Apple's latest iPhones.

The only problem with this look is that it's hardly original. Increasingly, phones have notches like the one Motorola bestowed on the G7 Power. Couple that awkward design with the G7 Power's rather noticeable bottom bezel and body clad in glossy plastic, and you're left with a phone that tries and fails to conceal its budget roots.

It doesn't help that the G7 Power is also very big, with its 6.2-inch display and a slightly thicker frame to haul around that beefy, 5,000-mAh battery. There's still a 3.5-millimeter headphone jack up top so you can use a good old-fashioned pair of headphones.

However, Motorola unfortunately hasn't added true IP-rated water resistance or near-field communication to any device in the G7 range, so this phone feels a bit dated, even at its low price.

Display: Colorful, but not the sharpest

The G7 Power trades the 6.2-inch, full-HD+ LCD display in the regular Moto G7 for a slightly lower-resolution panel with the same dimensions. Ordinarily, this wouldn't be a massive issue for such an inexpensive handset, but because the G7 Power's screen is no smaller than the G7’s, those missing pixels tend to make their presence known rather quickly.

The display on this $249/£180 variant measures 1570 x 720, which translates to about 279 pixels per inch. That's great for energy efficiency but not quite so good for the appearance of on-screen content. Text and icons can't help but look a hair jagged on the G7 Power, though the farther you hold the phone away from your eyes, the less noticeable the effect.

Motorola might be stretching those pixels a bit wider than we'd like, but at least the G7 Power's color reproduction and brightness didn't leave much to be desired. The handset covered 123 percent of the sRGB color space and notched a Delta-E accuracy score of 0.35 in our testing. Those are respectable numbers for a budget-priced LCD-toting smartphone. In fact, both are nearly dead-even with the pricier Moto G7 and its showings of 135 percent and 0.34, respectively. (For Delta-E, closer to zero is better.)

However, the G7 Power really impressed in its brightness. At 558 nits on the max setting, this member of Motorola's midrange family totally outshone the pricier G7 and its 445 nits. All that extra light coming through the display makes a big difference outdoors on a sunny day, when dimmer screens make reading text a struggle. In those scenarios, we'd definitely rather take the Power than its siblings.

And truthfully, if you can see past the resolution deficit, this is still a display you'd be happy to use to watch anything. I fired up Spider-Man: Into the Spider Verse and jacked the G7 Power's color profile up to Saturated to really make those juicy comic book hues pop. The searing neon lights of Times Square were the perfect backdrop for the web slinger's antics, and as I shifted the device in my hand from side to side, those colors stayed remarkably consistent.

Cameras: Good enough for the price

On the back of the G7 Power is one 12-megapixel camera with an f/2.0 aperture. It's not quite the same as the f/1.8, 12-MP sensor in the regular G7, but in practice, the G7 Power produces images that are very, very similar.

What G7 Power does lack, however, is a secondary 5-MP shooter to enable depth-of-field effects. However, this isn't a terribly huge absence either, because the Moto G7's shallow depth-of-field portraits and bokeh aren't all that impressive, as is the case with many other budget phones' dual-lens systems.

For those reasons, I came away reasonably pleased with the G7 Power's performance against its more expensive sibling. This shot of buildings hovering over New York City's Bryant Park looks pretty much identical in the two G7 models, even though the standard G7 costs $50 more.

Inside the park, the G7 Power compares favorably against one of our favorite camera phones for the money, the Nokia 7.1. Like other Motorola handsets of the past, the G7 Power does get a bit overzealous with the saturation; Bryant Park's iconic fountain isn't quite as red as the device would lead you to believe. That said, there really isn't much difference between these phones' photos, even though the Nokia 7.1 costs $100 more than the Motorola.

The G7 Power really struggles in portraits and bokeh, however. Because the phone has only one rear-facing lens, the device needs to rely on software, not optics, to blur the background.

Some high-end devices, like the Pixel 3 and iPhone XR, can accomplish software-based bokeh without a noticeable drop in quality. However, Motorola's computational photography isn't quite up to that level, and that leads to unwelcome artifacts and inconsistent blurring on the edges of my colleague Shaun's face. Additionally, Nokia's handset just does a much better job picking up those finer details in Shaun's face, as well as his skin tone.

Finally, the G7 Power's 8-MP front-facing camera also seems pretty much the same as the one in the G7. Problem is, it's not a particularly great shooter for selfies, as its shots are often noisy and just blurry enough that they always seem slightly out of focus. The Nokia 7.1, with its impressive dynamic range, more-accurate white balance and superior sharpness, easily takes the win here.

Performance: Solid, just not for gamers

The Snapdragon 632 system-on-chip and the 3GB of RAM in the G7 Power are sufficient for ordinary duties, like web browsing, navigation and social media. Just don't expect this phone to handle demanding games

The G7 Power plainly wasn't up to the task when I dove into PUBG Mobile. Even on the battle-royale shooter's lowest graphical settings and with the frame rate set to prioritize smoothness over visual fidelity, the experience was still jerky, which made it difficult for me to pick off enemy combatants.

F1 Mobile Racing ran much more consistently, though again at remarkably low settings. In fact, the resolution was so low and track-side scenery and lighting were so sparse that it looked worse than a PlayStation 2 game.

The culprit is the phone's Adreno 506 GPU. It's an old chip that can't keep pace with its modern contemporaries, in phones such as the Nokia 7.1. And it very clearly demonstrated its limits during 3DMark's Ice Storm Unlimited graphical benchmark, in which the G7 Power managed only 14,802. Some budget phones, including Nokia's, actually max this test.

Fortunately, Geekbench 4's overall test of system performance proved to be much more the G7 Power's forte. There, the inexpensive handset delivered a score of 4,485 — nearly 400 points behind the Moto G7's mark and around 500 behind that of the pricier, more powerful, Snapdragon 636-equipped Nokia 7.1.

Up to this point, the G7 Power probably seems like a totally serviceable, if uninspiring budget phone. And that conclusion would be mostly accurate; in fact, it's the same impression we came away with regarding the regular G7.

However, the G7 Power happens to have an ace up its sleeve — one the other Moto models don't — in its 5,000-mAh battery. And it's this battery that propelled the phone to an astonishing 15 hours and 35 minutes of endless web-page streaming over T-Mobile's LTE network in our testing. This runtime makes the Moto G7 Power the longest-lasting phone we've tested in the last two years.

For those keeping count, that's 7 hours longer than the 8 hours and 50 minutes the standard G7 granted us and more than twice as long as the 7 hours and 41 minutes from the Nokia 7.1, which costs $100 more than the G7 Power. And it's that endurance — especially in an era when it seems like phones are lasting less and less time on a charge — that makes the G7 Power stand apart from the budget crowd.

MORE: Smartphones With the Longest Battery Life - A Comparison

The G7 Power's battery life is the primary reason you should want this phone. Unfortunately, the same cannot be said for the amount of time it takes to top that battery back up. Even with Motorola's included TurboPower USB Type-C adapter, the G7 Power managed to get to only 29 percent capacity after 30 minutes of being plugged in.

Motorola has set a precedent for supporting its handsets with a quality, pure Android experience, and the G7 Power is no different.

The G7 Power ships with Android 9 Pie installed but will see one major update to Android Q over its life span. While Motorola hasn't fussed with Google's stock software experience, the manufacturer has given the G7 Power a number of extra features and shortcuts via the appropriately named Moto app.

In that app, you'll find options for gesture controls, old favorites like chopping to trigger the flashlight and twisting for the camera, and the always-on Moto Display feature, which elegantly serves up notifications and alerts even while the phone is in a low-power, sleep state. Moto Display was one of the first always-on interfaces on a smartphone, and even though it hasn't really changed in years, it's still just as convenient and useful today.

The G7 Power is not a flashy device. For the most part, it's a fine option for a cheap phone, with performance that's serviceable (so long as you don't game) and a software experience and selection of features that are among the finest in its class.

For $249/£180, that's fine. But the G7 Power stands apart in one big way: battery life. It's this handset's claim to fame, and it's a factor that shouldn't be overlooked. Consider that the $299/£240 Moto G7 really struggled with longevity on a charge and that for $50 less, the G7 Power provides an alternative that is almost the same in every way that matters while also lasting a lot longer on a charge.

For my money, I'd skip the regular G7's frivolous features, save $50 and go for the G7 Power. The peace of mind of having a phone that lasts an eternity is worth it. While the Nokia 7.1 offers a more premium design and better camera if you have more to spend, anyone chiefly concerned about battery life and looking for a device under $300 needn't look further than the G7 Power.