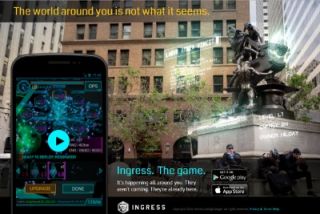 "The world around you is not what it seems."

A mysterious energy source called exotic matter or XM exerts a subtle influence over mankind, enhancing human civilization and creativity towards unknown ends. The Enlightened believe that XM is the key to human evolution, while the Resistance fights to keep mankind free from the alien influence of XM.

That's the backstory to Ingress, Google's hit augmented reality location game available on Android and iOS. As agents of the Resistance or the Enlightened, players use their smartphones to fight for control over virtual XM portals located at real-world landmarks, monuments, and sculptures. The game went into beta in late 2012, quickly becoming a viral hit in the Android gaming community thanks in part to active support from Google's Niantic Labs, with a continuously evolving story and global community events. With the recent launch of Ingress on iOS, the game welcomes a new wave of players ready to fly the flag for the Enlightened and the Resistance.

Ingress features an interactive tutorial that does an admirable job of teaching new players about the basics of gameplay; from collecting XM, hacking portals for items, attacking and capturing portals, and constructing mind control fields. Still, there are a lot of useful tactics and tools that a new player will find handy during the battle to control the fate of XM and humanity. Check out some of our favorite tips and tricks for new Ingress players below.

Information is ammunition, and one of the most useful sources of information for Ingress players is the official Ingress Intel Map. Powered by a Google Maps-style interface, the Intel Map helps players discover nearby portals (with filters for portal levels and energy remaining), complete with a street map view, or a Google Earth satellite image overlay. Whether you're planning your next walking or biking trek, searching for new portals or coordinating the actions of multiple players, the Intel Map is an invaluable tool for new and veteran players alike.

Players gain items such as resonators, XM pulse bursters, and portal keys by hacking portals. What many new players don't know, is that they can dramatically boost the number of items they can gain by long-pressing the 'Hack' button to initiate the Glyph Hacking mini-game. Doing this will pull up a series of glyph patterns, which players are challenged to repeat by tracing the patterns on screen. The more powerful a portal, the more numerous and more complex the glyphs, with better rewards available for completing the harder challenges.

Portal Keys are fundamental items that players can use to link portals, create mind control fields and remotely recharge allied portals, so it pays to have multiple copies of them. The easiest way to acquire a key from a portal is to hack it, but portals will not drop keys if you already have one or more keys for that portal in your inventory. The solution is a simple trick called "drophacking." Before hacking a portal, players tap on the small key icon in the portal screen and then keep dropping their portal keys until their inventory is emptied, allowing them to acquire new keys through hacking. Once done, you can then pick up the key by tapping on them in the Ingress game map. A word of caution though: don't drophack when enemy agents are nearby, as they can take advantage of that by picking up keys that you've dropped while you're busy hacking.

The image on the Intel Map above is a simple example of a technique called "layering." By constructing mind control fields and then nesting them within even bigger control fields, players effectively score twice the number of mind units or MUs; once for the small component fields, and again when the larger field is created. At its most basic, players should look for a large triad of portals with one or more portals that can be enclosed within the large control field. It can take some planning, but a well layered series of fields can be a massive MU multiplier.

The Ingress tutorial teaches players the basics of using XM Pulses to bring down resonators and disable enemy portals, but there are also other tools at your disposal. While the XM Pulse (or XMP) detonates over a large area, another weapon, the Ultra Strike, creates a much more powerful pulse over a smaller area. With a bit of careful positioning, savvy players can use Ultra Strikes to destroy portal shields and other mods by detonating right on top of a portal, using the Ultra Strike's powerful pinpoint burst.

Most powerful of all the weapons at an Ingress agent's disposal is the extremely rare ADA Refactor for the Resistance, and its Enlightened equivalent, the JARVIS Virus. A Resistance Agent can use an ADA Refactor to 'flip' an Enlightened portal, regardless of how powerful or well defended it is, allowing players to quickly seize a contested location. The JARVIS Virus does much the same for the Enlightened, flipping the allegiance of a Resistance portal. Needless to say, both items are very rare, very powerful, and much coveted by both sides.

Recycling isn't just ecologically friendly, it's a useful tactic in Ingress as well. Players can recycle items in order to gain small amounts of XM. If you find your inventory filling up with unused items, or just need a bit more XM for deploying resonators or launching attacks, recycling is the way to go. Access your inventory through the OPS button, tap on the surplus items you want to dispose of, and then tap again on the recycle button to scrap the item for a small amount of XM.

It may seem like a trifling matter, but a good agent pays attention to the weather forecast. It's no use mapping out all the portals you want to hack and capture if the weather isn't cooperating, and even then, a sudden squall or rainstorm can take you by surprise when you're out and about. Try getting your hands on a weather app that features hyper-local, minute-by-minute forecasts, such as Dark Sky or Accuweather, in order to get the best short term warning. Check out our roundup of weather apps for other suggestions.

8. Get in touch with the local player community

We've saved the most important tip for last: Get in touch with your local player community. Ingress isn't just a solo game; players take on the role of one of countless Agents for the Enlightened and Resistance alike. The most impressive feats in the game, such as construction of high-level portals and the creation of multi-layered, continent-spanning mind control fields require the cooperation of dozens of or even hundreds of players worldwide. Local teammates can help out by tanking low level players, providing in-game gear and showing you the ropes.

As Ingress uses your Google account to sign in, Google+ has become one of the most popular forums for local groups to form. The Android version of Ingress accommodates this, with an option to link your Ingress player profile straight to Google+.

So there you have it, Agents, a series of tips and tactics to make life easier for new players getting the hang of Ingress. We've tried to provide useful advice, but we can't cover everything. Do you have favorite tricks and tactics of your own that you wish to share with other readers? Feel free to sound off in the comments section below.