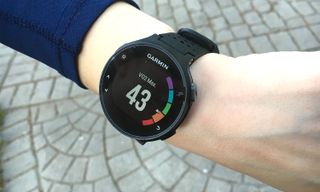 When it comes to running, nothing beats a dedicated GPS watch. These watches were designed for serious runners who want more than a basic fitness tracker by their side. Among the best watches in the market is Garmin's Forerunner 230. In addition to its built-in GPS — a must for any serious runner — this watch offers a customizable interface, a waterproof body, and provides all sorts of activity tracking for runners.

Although a watch like the Forerunner 230 usually sells for list price ($250), Amazon currently has it on sale for $175.90, which is the lowest price it's ever been.

The Forerunner 230 can calculate your VO2 max — a gauge of how much oxygen your body can process — and also receive text and call notifications from your smartphone, although there's no way for you to reply. The watch can also connect to Garmin's Connect IQ store where you can download apps, widgets, and golf courses to the watch.

The Forerunner 230 is clearly not a watch for the infrequent runner, but a great tool for anyone who is running their first marathon or looking to improve their current speed. At just $175.90, it's about as a solid of a deal as you'll get.