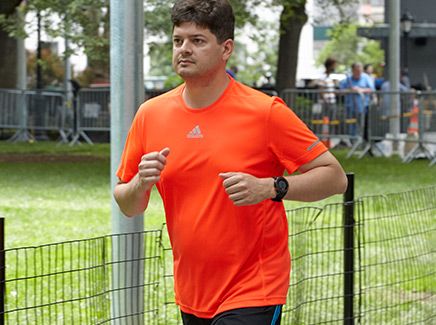 With the addition of an optical heart-rate monitor from Mio, the Garmin Forerunner 225 is the most well-rounded running GPS watch yet

Last year, when I ran the Chicago and Philadelphia marathons, I wore the Garmin Forerunner 220 GPS watch because I felt it had the best overall combination of display, design and features. However, I missed the built-in heart-rate monitor found on the TomTom Runner Cardio, which I had worn during previous races. Now, with the release of the $299 Garmin Forerunner 225 — which has all of the features of the Forerunner 220, as well as a built-in heart-rate monitor — I've found the perfect running watch.

Design and Interface: As Simple As Ever

In both form and function, the circular Forerunner 225 looks almost identical to the Forerunner 220. It's black with red accents, with three buttons on the left side and two buttons on the right side of the display. The only indication that the 225 is any different is that it's a bit thicker, with a rubber gasket running along the bottom circumference.

The 1-inch, 180 x 180-pixel screen itself is bright enough to view in full sunlight, and a backlight makes it easy to read if you're running while it's dark outside. The Forerunner 225 also doubles as an all-day activity tracker, and I like that you can view the time, date, steps and other metrics without having to turn on the display.

You can also customize the two running-centric screens to show the information most pertinent to you, such as distance, average pace and strides per minute. Although it's not as comprehensive as the Epson Runsense SF-810, it's much easier to navigate and change information on the Forerunner 225.

I didn't mind the Forerunner 225's bulkiness during the day, but I found its size (1.9 x 1.3 x 0.6 inches) and weight (1.9 ounces) too distracting to wear at night. Twice, I tried to sleep with it, but it was too uncomfortable, and I removed it after tossing and turning for an hour. To put that in context, the Forerunner 225 is about half an ounce heavier than the Forerunner 220, and a tenth of an ounce heavier than the Apple Watch. It's also 0.2 inches thicker than Apple's device. The TomTom Runner Cardio, which does not track sleep, is a heavier 2.1 ounces, but thinner at 0.54 inches.

Of the top-tier GPS watch makers, Garmin was one of the last to feature a built-in heart-rate monitor. No more. Like almost all wrist-based heart monitors, the Forerunner 225 uses an optical sensor (made by Mio) to measure your beats per minute. Critical to getting an accurate heart rate is a light-free seal; to that end, the 225 has a rubber gasket that runs the circumference of the bottom of the watch. While it sealed out light completely on my wrist, its large size could leave room for light to leak in on smaller wrists.

Making it even easier to see what heart-rate zone you're in, the Forerunner 225 has a multicolored gauge (much like a speedometer), which is divided into five sections that show how much energy you're exerting. Especially when I was running, it made it very easy to see how hard my heart was pumping, and adjust my pace accordingly.

The 225's heart-rate monitor was spot-on, for the most part. During a 6-mile run, I wore the Garmin, along with a Polar M7 heart-rate strap, which was linked to the RunKeeper app on my iPhone. Every 5 minutes, RunKeeper would call out my heart rate, and the Garmin 225 was never more than 1 beat per minute off. Only during one particularly sweaty run did the 225 inaccurately report my heart rate, and cinching the strap a little tighter fixed the problem.

The Forerunner 225's usefulness extends beyond race day, doubling as an all-day activity tracker — and an accurate one at that. Using solely its accelerometer, the 225 recorded 300 steps as 297, which is not bad at all.

You can cycle through the day's metrics, including goals for the day, the number of steps you've taken and the total distance traveled (which includes runs). After setting your initial goal — for example, 5,000 steps — the Forerunner 225 will keep upping the step count based on the actual number of steps you take.

MORE: How to Choose the Right Fitness Tracker for Your Needs

This GPS running watch also encourages you to keep moving during the day. The longer you sit, the more a red circle around the screen fills up. If you've been sedentary for 30 minutes, the watch beeps and implores you to Move! on the display.

If you can stand wearing the Forerunner 225 overnight, it will track the amount of time you sleep, as well as restful sleep versus nonrestful sleep.

Thankfully, the addition of a heart-rate monitor, as well as all-day tracking, didn't affect the Forerunner 225's battery life too much. Garmin says the watch will last up to 10 hours in GPS mode with the heart-rate monitor active. While my review unit didn't last that long, it should see me through a marathon with plenty of time to spare. I wore the watch for about a week and a half, actively using GPS for about 5 hours of that time, before I received a low-battery warning. The battery was down to 9 percent after I kept running for another 30 minutes.

Ever since I started incorporating my heart rate into my training regimen, I've become a lot more efficient with my running. The Garmin Forerunner 225 takes everything I liked about the Forerunner 220, and adds the crucial heart-rate metric to the mix. The TomTom Runner Cardio, which is available for as little as $229, is still a very competent GPS watch with heart-rate monitoring. Still, I'd spend the extra $70 for the Forerunner 225, which has a brighter, more colorful and customizable display, and tracks your nonrunning activities. If you're looking for a GPS running watch that can do it all, the Forerunner 225 will see you through to the finish.