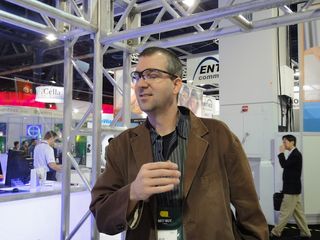 You can always count on great product demonstrations at CES. This year, Taser upped its game and was offering to Taser any willing volunteers. To cut a very long story short, we met with our old friend and former colleague Rob Wright for dinner, and somehow the topic of the Taser booth came up.

For anyone who doesn’t know, Rob LOVES Taser videos. He used to send them around the office all the time and he was the one behind the homemade Taser video that saw Ben Meyer get shocked with a heavily-modded disposable camera.

So, we're having dinner and talking about Taser International when Rob, now working as the Managing Editor at CRN, volunteers* to get Tased on camera. He agreed that it would make an interesting story, and who were we to argue with a journalist on a mission? We headed over to South Hall 4 of the Las Vegas Convention Center the next morning and got Rob all signed up to "expose himself to Taser International's technology," as the booth guy so eloquently put it.

He had to sign a very scary waiver form (which he didn't bother to read) and wait around for about 30 minutes, but it was worth it -- for me anyway.

Embrace pure, unadulterated Schadenfreude that is Rob Wright getting Tased:

So Rob recommends you don't do anything that could get you Tased; you will regret it! A huge thank you to our old friend for stepping up to the plate on this one. It was very nearly me that got Tased, so I'm especially grateful!

*Volunteering is the same as being coerced, right?