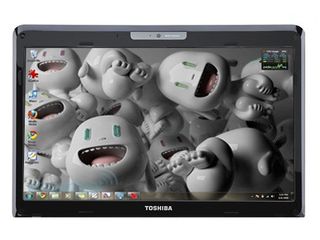 While the details are minimal, Toshiba is reportedly showcasing three tablets next month at CES 2011-- one with Chrome OS, one with Android, and one with Windows 7. Two tablets are said to offer 10.1-inch screens while the third will have an impressive 11.6-inch screen.

Other details regarding the trio are still unknown, however it's presumed that the Android model will use the tablet-oriented Honeycomb build (the same one other manufacturers are anxiously waiting on). It's interesting that Toshiba would offer two different Google operating systems, especially when a final stable build of Chrome OS is nowhere in sight.

"The ability of us in the software industry [to predict roadmaps] is less than stellar," Linus Upson, Google's engineering director in charge of its Chrome OS and Android, told PC Magazine. "So it's done when it's done."

As it stands, Chrome OS products aren't expected to go retail until mid-2011 or later, however the latest rumor has Toshiba's Chrome tablet-- along with the Android and Windows 7 tablets-- to arrive in Q1 2011. Out of the three, the Windows 7 version seems primed and ready for that particular timeframe, followed by a golden Google Android 3.0 Honeycomb sometime thereafter.

Guess we'll see what Toshiba has to offer in less than a month. There's no doubt that 2011 will be the year of the tablet, and that CES will be the primary launch platform. Are you ready?