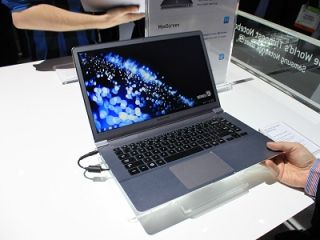 It seems like there are new tablets and Ultrabooks at every turn here at CES 2012. Now that Android 4.0 and quad-core SoC's are in the mix, the potential for new tablets is nearly limitless. And as far as Ultrabooks go? We've seen some truly impressive design and horsepower being packed this super slim form factor.

We started the day at Lenovo, and it didn't take us long to find one of our favorite Ultrabooks thus far. The IdeaPad Yoga will launch with Windows 8, pack the latest Intel Ivy Bridge processors, and ha a design that cannot be bested by any other machine at the convention this year. See the video below (click through for HD) to see it in action. Simply put: it's the most unique and exciting Ultrabook to date, and it's the front-runner for the best Windows 8 device of 2012. It's a race that still needs to develop, but the Yoga is the Windows 8 device to beat.

Lenovo is working on a "normal" Ultrabook offering as well, dubbed the ThinkPad T430u. The T430u will be a business-oriented Ultrabook, complete with the usual ThinkPad styling, although it has more of an Edge-style chiclet keyboard. You'll also find a fingerprint reader, 3G WWAN, up to 1 TB of storage (coupled with 16 or 32 GB of SS cache), optional Nvidia Optimus graphics, and a starting price of $849.

Lenovo is also pushing the included Smart Business Advantage, or SBA, which was developed by Intel and helps IT departments manage computers at the firmware level. SBA allows the T430' software to be monitored, backups initiated (even if the computer is off), and deep USB port control. If you don't want employees using USB drives on work machines, SBA allows ports to only recognize peripherals (mice and such) while blocking unapproved storage devices.

Another new offering is the S430, which is not an Ultrabook (its 1.5 mm too thick), but is still very thin while offering much in the way of specs. This 4-inch machine is under 4 pounds, about 20.3mm thick (while till including a DVD drive), and is one of the first non-Apple machines to rock a Thunderbolt port. Other features Intel SBA (it will be on all ThinkPad's going forward) and Optimus graphics.

Going backwards for a minute, The X1 Hybrid that was released last year is getting a makeover of sorts. On the surface, not much as changed, but Lenovo has put a Snapdragon SoC where the 3G WWAN card used to be. This dual-core CPU is paired with 1 GB of RAM and 16 GB of flash storage, and runs an Android-based custom OS. This lightweight environment can be accessed at any time from Windows - no reboot required - and allows you to access media and the Internet without using Windows (and much battery power). This Instant Media Mode can run for 10 hours off the internal battery, or up to 20 hours if the slice battery is attached.

As for tablets, Lenovo is bringing a new IdeaTab to the US with the S2110. It's thinner and lighter than the original, while packing a 1.5 GHz dual-core Snapdragon CPU. Much like the Transformer Prime, it comes with a keyboarddock that houses an extra battery, two USB ports, and a full-size SD slot. This Android 4.0 device will ship in the US some time in Q2.

...and while it's not a tablet or Ultrabook, I have to mention the IdeaCentre A720. This All in One (AIO) is a 27-inch 1080p display sitting on a base not much thicker than a Nintendo Wii. The A720's display comes all the way down to be flush with your desk or table, something most of the competition cannot do (yet).

Current page: CES 2012: Year of the Ultrabook, Rebirth of the Tablet

Next Page Asus, MeMO and the Transformer Prime