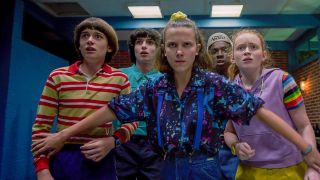 We're turning the internet Upside Down to discover the truth about Stranger Things 4. While one returning cast member will probably surprise you, there's more to be gained in Netflix's teaser trailer and other promotional information and the first episode's title. We've also just learned about when this season will actually begin and end production, giving us a clue about its release date. So, what changes are in store for Eleven, Dustin, Will, Steve and the rest of the Hawkins, IN folks who survived last year's mall massacre?

If you're like us, and completed Stranger Things 3 in less time than it takes to hang up your holiday lights, we're guessing you too are on the lookout for information. Here's everything that's been confirmed, a few rumors and theories and everything we want to know about the next adventures of the best kids on Netflix.

So, of course, understand that beyond this point lie spoilers for seasons 1 through 3 — and even a potential spoiler for season 4.

We've got a Stranger Things 4 trailer, and it's more of a hype package than a reveal. Since production hasn't started on the show yet, Netflix has only given us a YouTube video that confirms that the new season is coming.

Also, check the tagline: "We're Not In Hawkins Anymore." That confirms what you'll see below, that we're gonna spend some time outside of the city our heroes spent so much time protecting.

"We’re pretty excited about where it’s potentially going to go. Again, like we said, it’s going to feel very different than this season. But I think that’s the right thing to do and I think it’ll be exciting."

Netflix hasn't given us a date yet, but that hasn't stopped us from figuring out the a couple of likely months for Stranger Things 4's release. Season 1 came out on July 15, 2016, the second season arrived on October 27, 2017 and the third season dropped on July 4, 2019.

Squinting at these dates, and thinking about what happens next, we used to think that Stranger Things 4 could arrive on Netflix in October 2020. In addition to the below speculation, this tweet from the Stranger Things writer's room Twitter account suggests we won't wait until 2021 for Stranger Things 4:

The only issue is that Stranger Things has been there, and done that, with two Halloween seasons. So, let's recall the tease of a Byers' Christmas, dropped into the Stranger Things 3 finale. Hopefully it's not a Demogorgon under the tree.

Comicbook.com is reporting that Stranger Things 4 production is set to begin in January. This is in line with a TVLine report that put forward the same start date, and claimed production would end in August, which would eliminate October, due to proximity. This could push us to Christmas, New Year's Eve or even Spring 2021.

Stranger Things star David Harbour told Variety that the big delay for season 3 was tied to the time it takes for the Duffer brothers to write scripts. Not in a bad way, just that they "write for 12, 14 hours per day."

Who's coming back for the Stranger Things season 4 cast?

Even if the show sees the kids shift away from Hawkins (what could Ross Duffer have been talking about?), I expect we'll see Dr Sam Owens (Paul Reiser).

Further, Brenner (Matthew Modine), who "raised" Eleven in the Hawkins National Laboratory, is an important member of the Stranger Things lore. I'll get to him in the plot section.

And what about Hopper (David Harbour)? Well, that's a bit more complicated. Yes, it's likely he died in the climactic moments of season 3, but Harbour is contracted for a fourth season. Does that mean we'll see Hopper in visions or dreams, like how Eleven saw Billy's past? Feels likely. Flashbacks don't seem to make sense for this show.

What do we know about the Stranger Things season 4 plot?

In terms of "The American" that the Russians spoke of, who's locked in one of their base's rooms (one of which also has a Demogorgon), many speculated that this person was Dr. Martin Brenner. If the Russians are so keen on understanding The Upside Down, and Eleven (who got in their way in season 3) it would make sense that they'd be holding the man who knows the most about both.

The show will likely need to use some plot device to pull the Byers family from their new home, back to Hawkins.

While the new season will likely spend some time there or elsewhere — The Duffers told EW that Season 4 is "going to open up a little bit...not necessarily in terms of scale, in terms of special effects, but open up in terms of allowing plotlines into areas outside of Hawkins." — I doubt the show would end without a return to where it all began.

The Stranger Things writer's room is sticking to the tag line from the trailer, tweeting a meme reading "not in Hawkins anymore."

How far from Hawkins will they go? IGN reports that trade magazine Production Weekly lists the season's working title as "Tareco" which is a Brazilian biscuit.

In an interview with Teen Vogue, Sadie Sink said her character Max will likely spend some time hiding the trauma of losing her brother Billy: "I think it makes sense for her, because that’s kind of as messed up as their relationship was ... [Billy’s death] still really affects the dynamic within her family. But in true Max fashion, she’s not going to let anyone see how she’s really feeling at some points. You see her just pretending that everything’s fine, when really, everything’s changed for her. She’s in a completely different emotional headspace."

The last big of unresolved business is how Eleven has lost her powers, and will probably spend some time trying to regain them. Will Brenner be crucial to that as well?

There's even speculation of an entire season taking place in The Upside Down, or at least focusing on a quest to free Hopper from the scary world.

Lastly, let's read into the name of the first episode of Stranger Things 4:

looking for new members... are you in? pic.twitter.com/P1xAWNUPssNovember 7, 2019

That script you see above reveals that the new season starts off with some attention being paid to something called The Hellfire Club. There are two possible meanings here. Knowing that Stranger Things loves nostalgia, I'm leaning towards the guess that the kids have become bigger X-Men fans, as The Hellfire Club is a villainous faction introduced in the comics in the 1980's.

The broader definition of a Hellfire Club brings our point of view to exclusive clubs for members of high society, seen in 18th century Britain and Ireland.

A wild fan theory, reported by Express.co.uk, claims that Eleven might actually be Hopper's daughter. This is pure speculation and at times seems like they're stretching things, so don't bet on it yet.