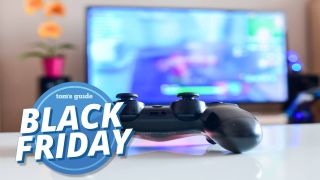 It's worth noting that we've yet to see any significant Nintendo Switch Black Friday deals. Sure, there are a few bundles out there, but so far we haven't seen any major dollar-off Nintendo Switch sales, so we're recommending you put that credit card away — for now at least. Likewise, no retailer has touched the Nintendo Switch Lite. (It hit $169 back in September and we predict at least one retailer will offer that price again this month).

But don't worry, we'll add those deals as soon as they come. In the meantime, here are the best cheap gaming deals you missed last night. Hope you slept well!

PS4 w/ 3-Games: was $249 now $199
Although this was marked as a Nov. 27 doorbuster, Walmart now has the PS4 "Only on PlayStation" Bundle on sale for $199. It comes with The Last of Us Remastered, God of War, and Horizon Zero Dawn. That's similar to the sale Walmart offered last Black Friday (albeit with different games).View Deal

Sony PS4 Pro: was $399 now $299
If Walmart's main PS4 Pro bundle deal sells out, you can still get the PS4 Pro console for $299. Sure, there's no game included, but this is still the best price we've seen for Sony's 4K console and an amazing deal on its own. View Deal

Xbox One S All Digital Console: was $249 now $149
The all-digital version of the Xbox One S lets you enjoy disc-free gaming. The 1TB console comes with downloads of Forza Horizon 3, Fortnite Battle Royale, and Minecraft.View Deal

God of War PS4: was $29.99 now just $9.99
Sony's breathtaking God of War reboot is one of the best PlayStation games ever made, and can be had for next to nothing right now.View Deal