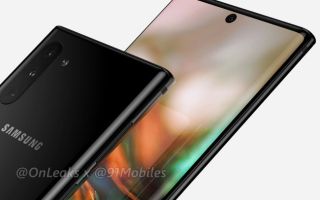 UPDATE: August 2, 11:00 EST - Evan Blass has since made another tweet (screenshot below) about the Note 10’s CPU, saying that the handsets sold in the US will all use the Snapdragon 855, and not the Exynos 9825 as he reported earlier today. This article has been edited to reflect this development.

Unlike most smartphone manufacturers which keep to a single CPU per series, Samsung offers Snapdragon processors in the US, and its own Exynos chips in the rest of the world. While a recent rumor suggested that this was about to change with the Galaxy Note 10, the source of the rumor has now spoken out again to retract his earlier statement.

Evan Blass, noted poster of smartphone rumors via Twitter, said early on the morning of August 2 that the only Note 10 phones with Snapdragon processors in the U.S. would be those sold by Verizon. For everyone else around the world, there would be an Samsung Exynos 9825 at the Note 10’s heart.

Blass added that the Snapdragon chip being used in the Verizon models was the 855, rather than the Snapdragon 855+ as he had previously suggested. This put recent leaked benchmarks for the Note 10 in a new light, as their low score makes a little more sense if the benchmarked phone contained a standard 855 processor rather than the enhanced 855.

However, a few hours later Blass returned to Twitter to say he’d made a mistake. After speaking to more sources, he now says that all US Note 10 stock will use the Snapdragon 855 processor, not just those sold by Verizon. He still stands by the claim that it won’t be an 855+, but he no longer believes the Exynos chip is coming to the U.S. after all.

While this latest update falls in line with what we expected to find powering the Note 10 in the US, it’s still a disappointment that it won’t be the 855+. The Asus ROG Phone 2, due to launch in September will use the upgraded version of the chip, and promises to be the most powerful Android phone yet because of it.

We’ll soon know what’s really going on inside the Note 10 as the reveal takes place on August 7. Our Note 10 rumor round-up contains all the news and rumors we’ve heard so far if you want to make sure you’re up to speed before the event begins.