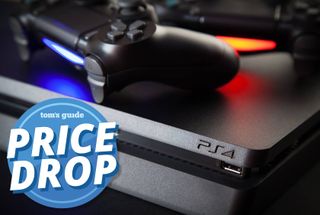 Walmart Black Friday deals continue to roll out this weekend. For a limited time, you can nab an excellent PS4 bundle at a Black Friday price.

Currently, Walmart has the "Only on PlayStation" PS4 Bundle on sale for $199. This PS4 bundle retails for $299.99, so that's $100 in savings. It's the lowest price we've ever seen for this PS4 bundle and one of the best PS4 Black Friday deals we've seen so far.

PS4 "Only on PlayStation" Bundle: was $299 now $199
This bundle includes a 1TB PS4 console, a PS4 Dual Shock 4 wireless controller, God of War, The Last of Us Remastered, and Horizon Zero Dawn: Complete Edition games.View Deal

The "Only on PlayStation" PS4 bundle includes a 1TB PS4 Slim console, a PS4 Dual Shock 4 wireless controller and a trilogy of PlayStation Hits games: God of War, The Last of Us: Remastered, and Horizon Zero Dawn: Complete Edition. Since the standalone PS4 system costs $299.99, you're getting three award-winning PS4 exclusive games for free.

The PS4 is the best overall console you can own and it's the only gaming system with VR support. Sony's console has arguably the best overall game library of any system. And $100 off, the Only on PlayStation bundle is an even greater value and the ideal PS4 starter pack.

It's one of the best gaming deals online and it's available through Cyber Monday. (Though we'd buy it now in case it sells out).