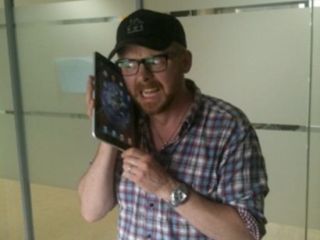 We first enjoyed Simon Pegg's offbeat brand of British humor in Shaun of the Dead, a well-made comedy that pokes fun at the zombie apocalypse genre. We also enjoyed his take on Scotty in the new Star Trek movie. With such a resume, Pegg's hilarious roast of the iPad's size—with a heartfelt plea for an ambulance—only adds to our admiration.