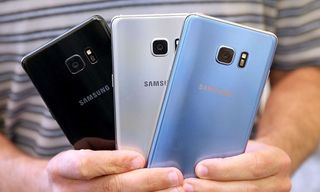 Samsung has shipped more than 500,000 replacements for Galaxy Note 7 smartphones that were recalled due to a battery issue that caused the phone to explode, the company said today (Sept. 20). These new phones are planned to hit retail shelves tomorrow across the United States.

"Working hand in hand with the CPSC, we are delivering as promised and moving quickly to educate consumers about the recall and make new Note7s available," Tim Baxter, president of Samsung Electronics America said in a press release. "New devices will be in stores no later than tomorrow and we will continue to take the necessary actions to ensure users are powering down and immediately exchanging recalled devices."

The company is also alerting customers to two ways to note if they have a safe or defective phone.

MORE: iPhone 7 and iPhone 7 Review: Great Upgrades, But One is Greater

Following an upcoming software update for all Note 7 phones, the replacement units will feature a green battery icon, while the recalled phones show a gray icon. Additionally, users with recalled models will get a pop-up that tells users to power down and stop using the phone and provide instructions on how to learn more.

The explosions garnered a ton of media coverage globally as the company stumbled to put together a recall program. Airlines banned the phones and trucking companies refused to ship them. It couldn't have come at a worse time for Samsung, as Apple announced and shipped its iPhone 7 and 7 Plus.