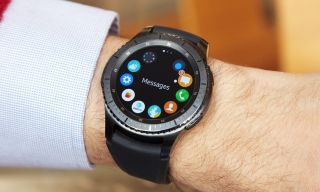 Samsung just accidentally confirmed all the rumors we've been hearing for weeks.

The company on Monday (July 23) updated its online store with a new listing for an as-yet announced Galaxy Watch smartwatch. The model it posted to its site was a 42mm option with a Rose Gold finish. It also comes in Bluetooth.

According to CNET, which captured a picture of the smartwatch's listing on the website, Samsung quickly removed it. But by then, the damage was done.

The obvious gaffe didn't do much to shed light on exactly what Samsung might have planned. There were no specs listed under the smartwatch like in other devices on the listing. And when those who saw the listing tried to click on it to go to a product page, nothing opened.

Rumors have been swirling for quite some time that Samsung would launch a new Gear S4. However, in recent weeks, it was revealed that the Gear S4 branding might be tossed aside for Galaxy Watch. The move is meant to keep the smartwatch branding in line with the company's Galaxy line of smartphones.

While not much is known about the Galaxy Watch, the listing tells us some things.

MORE: Big Galaxy Note 9 Leak: See It From Every Angle

For one, the Galaxy Watch will have a round face, as several rumors have speculated. And considering it'll be available in rose gold and appears to have a premium finish, Samsung might pitch the device as a high-end alternative to the Apple Watch and other smartwatches.

Considering that Samsung is planning a big press event on Aug. 9, where it's expected to unveil the Galaxy Note 9, we expect to see the watch unveiled then.