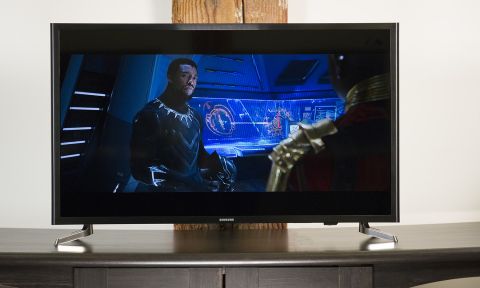 The Samsung 32-inch M5300 is an inexpensive and compact full-HD set with good smart-TV functions, but the picture and sound don't wow.

When it comes to inexpensive TVs, the Samsung 32-inch M5300 is part of a varied group. In the sub-$300 space, you can find everything from capable smart TVs with full-HD displays to 720p screens and sets that won't connect to anything but HDMI. In a category defined by what you won't get, the M5300 stands out for offering a full-featured smart-TV experience and a reasonably designed remote, but it does suffer from a mediocre display and lousy sound quality.

This is not a premium device. The 32-inch Samsung M5300 has plastic construction, with bezels measuring 15 millimeters thick on the top and bottom, and 20 mm thick on each side. The TV cabinet has a rounded edge on the right and left side, and the back is tapered with a gentle curve.

A subtle textured pattern is molded into the surface of the plastic cabinet, which is a nice touch on an otherwise plain set. Along the bottom bezel of the M5300 is the IR sensor for the remote control. While it serves a purpose, the protrusion sticks out like a sore thumb and interrupts the otherwise clean lines of the TV.

The included stand comprises two plastic feet with a faux-metal finish. They attach to each end of the M5300, and are 5.7 inches deep and 27 inches wide. The set weighs just 8.6 pounds with the stand attached (or 8.4 pounds without it), which makes it easy to pick up and move from room to room. The set is also compatible with a regular 100 x 100-millimeter VESA mount, letting you hang it on a wall or mount it on an articulated stand.

On the right side of the M5300 are two HDMI ports, including one with ARC support, a single USB port and a coaxial connection for antenna input. On the back of the TV, there are connections for composite video and RCA audio, an optical port for digital surround sound and a wired Ethernet connection.

Having just two HDMI ports may be an issue if you have several sources to connect to, like a Blu-ray player, a satellite box and a game console. If you think you'll need more than two HDMI ports, consider buying an HDMI switcher, which will save you the hassle of manually swapping HDMI cables to switch between devices.

The 1080p display is reasonably sharp and clear for a full-HD panel. The set features Samsung's PurColor LCD display technology and a 60-Hz refresh rate. Obviously, you won't get support for high dynamic range (HDR) on a 1080p set, since HDR is generally offered only on 4K sets.

The low refresh rate was evident during quick-moving action scenes. Swiftly moving objects looked choppy — an ax flung in the middle of a fight scene in Deadpool was choppy as it flew through the air, and a speeding motorcycle lacked the smoothness you would see at a higher refresh rate.

The display also suffers from inconsistent backlighting, with shadows in the corners of the screen and additional subtle shadows across portions of the middle of the screen. The edge-lit panel also had trouble displaying bright lights against dark backgrounds, showing severe halos around bright objects.

Viewing angles were also an issue, with pronounced color shifting visible at only 20 degrees off-center. That means you might be able to watch a movie with one person next to you on the couch, but a third person would have to put up with unpleasant color changes.

Colors were vibrant, but sometimes they were oversaturated, taking on unnaturally bright hues. This was true whether I was watching 1080p content from Blu-ray discs or flipping through channels pulled in on an antenna. On over-the-air channels, colors looked fairly vibrant and accurate. Sesame Street looked great, with colorful Muppets and fairly good detail for a 1080p screen. Cookie Monster's fur appeared to be the correct shade of blue, while human co-stars had accurate skin tones.

But although the M5300 reproduced a wide range of colors, those colors were inaccurate. In standard mode,  the M5300 had a Delta-E rating of 16.9 — one of the worst ratings we've seen. The Sharp LC-40LB480U was the next closest, at 8.5. (Numbers closer to zero are better.) Looking at the test chart above, you can see that red, yellow and green were fairly accurate, but blue and purple tones were heavily skewed. Switching to movie mode did improve the overall accuracy to a delta-E rating of 3.2 (closer to zero is better), which made for a much better looking picture..

Unsurprisingly, the audio quality was poor on the M5300. Considering  built-in speakers on premium sets struggle to provide great sound, I didn't expect much from a sub-$300 model like the M5300. When I tested the M5300's speakers, they managed decent treble at lower volumes but had no bass.

Listening to bass-heavy tracks like Elastica's "Connection" and Veruca Salt's "Seether" left me feeling unfulfilled, as the thumping bass lines were reduced to almost nothing. Turning up the volume not only emphasized the lack of bass but also introduced unwanted distortion and resulted in clipped audio and cabinet buzz.

The M5300 includes Samsung's smart-TV capabilities, which let you stream from services like Netflix and Hulu, and support apps such as YouTube and Deezer. Unlike with the display and audio, Samsung didn't compromise on smart-TV features; the M5300 comes with the same functionality found on Samsung's more expensive sets. The Connect Hub gives you a central point to connect all of your various smart-home devices.

It's quick and easy to set up the TV's over-the-air channels. You simply connect the antenna to the coaxial connector, conveniently located on the right side of the display, and select "TV" as your video source. The set will then walk you through the channel-scanning process and quickly cycle through the available channels in your area.

Unfortunately, the remote that comes with the M5300 is not the minimalist wand included with Samsung's more expensive TVs. Instead, the standard remote has a more pedestrian design, with a rectangular shape and curved back, and its face is covered in 45 buttons.

You navigate through the menus and apps with a four-button directional pad; the Home and Exit buttons make it easy to jump back to the home menu. Channel and volume rockers let you channel surf, and number buttons let you hop right to a specific channel. Media-playback buttons let you play, pause, stop and zip forward and back through your content, and they even work with apps like Netflix and YouTube.

The remote doesn't offer the built-in mic that Samsung's fancier sets use for voice interaction, but it does have one button that I often long for on these sorts of button-covered remotes: A Light button that makes all the other buttons glow for easy identification in the dark. When the lights are low for a movie, finding the right button is as easy as lighting them up and taking a look, without needing to feel for little tactile nubs or remember the button layout when you're fumbling to mute the TV.

Samsung's 32-inch M5300 isn't aimed at cinephiles. It's a low-cost TV that isn't very big, has a resolution of only 1080p and has middling picture and sound quality. However, it’s a pretty capable smart TV, and it's a good small TV for all sorts of places you wouldn't put a more expensive set, like in the kitchen, in a kid's room or in a dorm room.

The mediocre performance is comparable to what we’ve seen on other inexpensive sets, like the Insignia Roku NS-39DR510NA17, while the level of smart functionality is significantly better than what we saw on others.