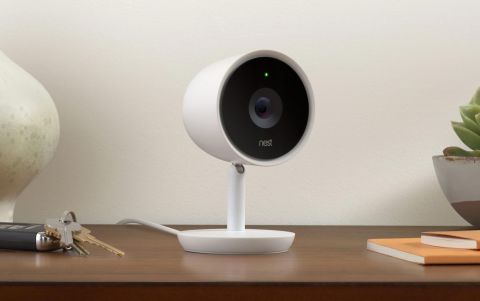 The Nest Cam IQ is a step above Nest's previous models, offering excellent audio, good to very good video quality and intelligent, intuitive software. However, it's expensive, and requires a cloud subscription to access your video history and other key features.

Nest's newest security camera – the Nest Cam IQ – looks a lot like the Nest Cam Outdoor. However inside, Nest has made a number of changes, including higher image resolution, better dynamic range and significantly improved audio compared with the previous model. Nest's app has some cool new tools, such as facial recognition, making it one of the best Google Home compatible devices around. What hasn't changed is its ease of use and comprehensive features – and the lack of important services, including video history and Activity Zones, unless you subscribe to the company's cloud service.

The sleek Nest Cam IQ is a solid, well-constructed white polycarbonate device about 5 inches tall. Its conical camera head, 3 inches in diameter, rotates 180 degrees horizontally and 160 degrees vertically on a thin 1.5-inch leg, but stays firmly in whatever position you place the head. The 3-inch disk base is nicely weighted, helping to keep the camera in place on horizontal surfaces.

Alerts are signaled by an eye-catching electric-blue ring light that encircles the black camera bevel, plus a small status light under the camera. Two-way audio is provided via a three-microphone array to the left of the lens and a speaker that's on the back. Two 940nm infrared LEDs on either side of the lens provide good illumination for nighttime capture.

The IQ has no local storage and no batteries. Its 10-foot power cable plugs into a large round block that spreads out to obscure an adjacent electric outlet.

Nest has made a few nice additions to its intelligent, customizable motion and sound detection. However, key features such as Activity Zones, sound analysis and Familiar Face detection are available only if you subscribe to its cloud service (more on pricing below).

One of the nice new features is that the camera automatically zooms in on the area of the room where an activity has been detected, which makes it easier to quickly identify the source of the alert. Text and email notifications include a screen capture of that zoomed-in view. However, if the activity is near the periphery of the frame, it often doesn't trigger the zoom.

If you subscribe to the Nest Aware cloud service, when the app detects a face, it will ask you to name who it is. These stored Familiar Faces are used to identify the individual who triggers an alert when you receive notifications. In our tests, the software was very good at recognizing most people whose faces we had named.

Nest claims the IQ can distinguish between people and pets; however, we frequently received person alerts when our cat Rascal passed through the dining room. Unlike detected human faces, the software has no way to teach the camera to recognize Rascal. Similarly, though the new audio analysis supposedly distinguishes between a person speaking and a dog barking, it failed to recognize barking even when our dog was within 3 feet of the microphones.

The IQ's 1/2.5-inch, 8-megapixel (4K) CMOS sensor with 12x digital zoom has a significantly higher resolution than previous Nest cameras and compares favorably to the Arlo Pro's 720p videos. In addition, the IQ's firmware combines daylight video files to create a high dynamic range (HDR) image. The result is a very good quality daylight 1080p video that is clean, crisp and bright with better detail in the shadows.

When in night mode, the two 940nm LEDs use an infrared cut filter that doesn't emit the telltale red glow that gives away many other cameras. They provide a nice level of illumination even in a completely dark room, though with some vignetting along the periphery of the 130 degree field of view. We were able to easily recognize faces in our night mode videos, though movement tends to be blurred.

Recorded audio and live two-way communication are dramatically improved in this model. The three-microphone array combined with the new noise suppression and echo cancellation produces sound that is loud, clear and distinct, regardless of the person's position in relation to the camera. While the speaker is on the back of the camera, its sound is clear and easy to understand, enabling smooth conversation via the mobile app to and from the camera.

While Nest has added a few useful features to its Nest Aware cloud service, it remains a poor solution for the user. That's because after the one-month free trial, you will have no continuous recording, Familiar Face detection or Activity Zones unless you pay a monthly fee. Most important, unlike the Arlo Pro, the IQ has no local storage, so you will also have no access to your video history. Instead, you will be able to view only snapshots from the past 3 hours.

The Nest Cam IQ's simple, trouble-free installation follows the industry standard of downloading the app to your phone and scanning a QR code (conveniently on the base of the device) to pair it to the software.

Most other cameras require being placed near your network hub for installation and then moved to their monitoring location, which can sometimes cause network connection problems. The IQ can be plugged in where you want it and then installed. The app immediately found the camera.

The Nest software is easy to navigate and understand, and the features tend to be deep and intelligent. For instance, the interface for scheduling the times when your camera is on or off is both flexible and convenient, allowing you to set a number of periods within each day of the week or set the same period for several days at once. Similarly, you can define several irregularly shaped Activity Zones by simply dragging on the eight nodes of the shape.

The iPhone and Android mobile apps are clean, with only a handful of icons. Most controls are centralized in Settings. Auto rotate between the horizontal and vertical views is responsive, as is the two-finger pinch/spread, which takes advantage of the 12x digital zoom.

The web portal is just as accessible and well-designed. However, given the portal's extra screen real estate, it offers better viewing of timeline details. Other differences in the portal (compared to the apps) include greater control over clips and the ability to define and manage Activity Zones. On the other hand, Family sharing of the camera is enabled only through the mobile app.

Finding specific events in the library and (if you subscribe to Nest Aware) playing back the related video is very easy. Both also display dots color-keyed to defined alerts, such as motion or audio detected within a defined Activity Zone. Release your mouse or remove your finger to play the video from that point onward.

Subscribers can also save a clip of the selected video from the apps and the portal.

However, the portal has more functionality in editing and managing the clips. In the portal, you can you set the beginning and end points of the saved video, as well as download your clip, link to it and share it to Facebook, NestDoor or Twitter.

Beyond integrating with Nest's Smart Home products, the IQ also works with the best Google Home smart speakers, Wemo, LiFX, SkyBell and the Echo Show. That compares favorably with the Arlo Go, which integrates with SmartThings, Wink, Telguard, Stringify, IFTTT and Alexa. However, Smart Home integration for all security cameras is still evolving, with new protocols being added by most vendors on  regular basis.

The Nest Cam IQ has very good day time image quality (it's pretty good at nighttime, too), excellent audio, and its software is one of our favorites among security cameras. However, it's expensive -- $100 more than previous Nest cameras, as well as our favorite outdoor camera, the Arlo Pro.

In addition, given that access to your video history is a primary purpose behind having a security camera, the IQ's lack of any local storage forces the user to pay for a monthly cloud plan. For those two reasons, the Netgear Arlo Pro cameras are a better deal, but the Nest Cam IQ is also worth your consideration.