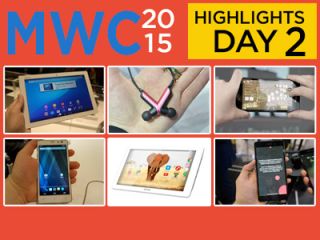 Breaking news continues to roll in from Barcelona, Spain, where our editors and writers are attending this year's Mobile World Congress. Yesterday brought us new mobile chips, new phones and new biometric passwords, as well as new tablets and fitness trackers.

We'll have to wait to get these devices into our labs to verify the manufacturers' claims, such as BlackBerry's declaration that its new smartphone will last for 25 hours of heavy use. But for now, these are the companies and devices from MWC Day 2 to keep an eye on.

Intel revealed three new mobile chips: the Atom x3 for phones and connected tablets, and the Atom x5 and Atom x7 for mainstream tablets. The Atom x3 is designed for low-end phones that sell for less than $150 in developing markets. The x5 will likely be the most common of the three new chips, and is intended to power devices that cost between $150 and $350, supporting displays of up to 2560 x 1600 pixels. The x7 chip is meant to power high-end tablets,and should offer double the graphics performance of the previous generation of Intel mobile chips.

Fujitsu Iris Scanner on a Smartphone

Fujitsu showed off a new prototype smartphone that has a unique security feature. The phone will use an infrared camera to scan your irises for your password; no pins, patterns, finger swiping required. During our hands-on time the process to set it up took about 10 seconds, but worked nearly instantly afterward. The company plans to license the technology to other vendors, so it may show up in future handsets.

MORE: Stare to Unlock: This Phone Scans Your Iris

BlackBerry is getting all touchy with its new Leap smartphone. The $275 device, due out this spring, features a 5-inch, 720p touchscreen, 16GB of onboard storage and an 8-MP rear camera. The company claims the 2800-mAh battery should last as long as 25 hours of heavy use, which is something we can't wait to test for ourselves. Apps will be available via BlackBerry World or the Amazon Appstore.

The privacy-obsessed folks at Silent Circle took the wraps off the second-edition Blackphone secure smartphone, and it looks great. The Android-based PrivatOS inside this flagship phone will soon offer a new feature called Spaces, which will separate personal and work data for administrator-level control of enterprise information. Silent Circle is also rolling out a new secure conference-call platform. The handset itself sports a 5.5-inch HD display made of Gorilla Glass 3, and is powered by an octa-core Qualcomm CPU with 3GB of RAM. No price or availability dates have been announced.

Who needs a wrist-bound fitness tracker when you can wear one in your ear? The 119-euro Huawei TalkBand N1 earbuds track your steps, calories and distance traveled, while also acting as a Bluetooth headset and an MP3 player. With 4GB of onboard storage on the unit, you can play up to 1,000 songs. The sleek design is nothing to sneeze at either.

Sony's new Xperia Z4, unveiled at MWC, is the world's lightest and thinnest 10-inch tablet, and will resist water up to 1.5 meters (5 feet) deep for 30 minutes. It weighs just 13.7 ounces. It features a rich 2K display (2560 x 1600 pixels) and comes with a powerful 2-GHz octa-core Qualcomm processor. It will ship in June, but no pricing has been revealed yet.

Fusion Storage is a proprietary technology from Archos that combines the storage of a microSD card with a device's built-in internal storage. At MWC, this technology was revealed on the company's new Magnus tablet line, which will offer 256GB of internal storage. The Archos 101 Magnus ($179), Archos 94 Magnus ($349) and the Archos 101 Magnus Plus ($349) will all run Android 4.4 KitKat. All three are expected to hit the market in April.