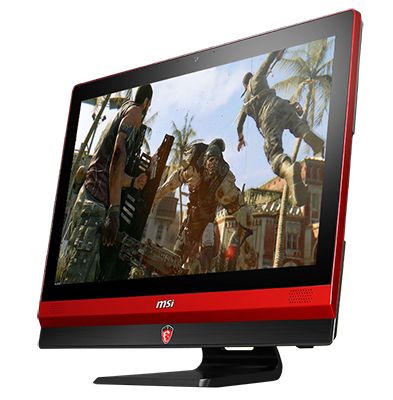 The MSI 24GE all-in-one packs a rich 4K display and strong performance, but doesn't quite have enough muscle to play high-end games at Ultra HD.

Gaming desktops and all-in-one PCs are both making a push toward 4K, and MSI's 24GE computer represents a fusion of the two. With a 23.6-inch, 3840 x 2160 display that hides an Intel Core i7 processor and a GeForce GTX 960M graphics card beneath, the 24GE ($1,799 starting, $1,999 as reviewed) aims to provide the sharpness of an Ultra HD monitor backed by the guts of a dedicated gaming PC. However, while the 24GE all-in-one dazzles with its lush display and overall performance, it doesn't quite have the strength to run many modern games at 4K.

Even without the company logo in its center, you'll know the 24GE is an MSI machine the second you lay eyes on it. This all-in-one sports the slick, black-and-red aesthetic that MSI's gaming PCs are known for, with a deep-red frame and an attractive, metal-brushed bottom panel that houses MSI's signature dragon logo below the display.

MSI's all-in-one is supported by a curvy, L-shaped base, which lets you tilt the display about 30 degrees back and forth. If you prefer to showcase the 24GE on your wall, you can unscrew the PC from the stand and attach it to a VESA wall mount.

The 24GE places a good amount of controls and ports at your fingertips, but some of its most crucial connections are frustratingly buried in a small enclave in the back. Adding insult to injury, most of the ports are facing downward. This forces you to get a little acrobatic if you want to use the PC's Ethernet port, headphone and microphone jacks, USB 2.0 port and additional two USB 3.0 ports.

On the machine's left edge, you'll find a power button, a sleep button and up and down buttons that can be toggled to adjust either volume or brightness. Two USB 3.0 ports and a 3-in-1 card reader are located just below those buttons, while the PC's DVD Super-Multi drive sits on the right edge. One of the two front-facing USB 3.0 connections is Super Charger-ready, meaning you can charge your USB devices even when the desktop is powered down.

This section also hides both HDMI in and out connections -- meaning you can plug the 24GE into external monitors for more screen space, or plug in your game console or media player and use the all-in-one as a dedicated monitor.

The 24GE's 2-MP webcam will do the trick for video chats and Twitch streams. The camera accurately captured my skin tone and dotted red shirt, though I did notice a good amount of pixelation when I looked closely at my facial features.

The 24GE's 23.6-inch, 3840 x 2160 (or simply 4K) display caught my eye long before I played any games or watched movies on it. Images on sites such as Tom's Guide and ESPN looked colorful and vibrant, and text was so sharp it almost looked handwritten -- even when I magnified it.

The PC's display proved even more impressive when I moved on to some meatier content. The sunny blue skies and shiny floating buildings of BioShock Infinite looked very pretty in 4K, especially in the way rays of light bounced off of my machine gun. A 4K trailer for Elysium looked just as snazzy, as shots of gorgeous grassy plains, exploding robots and a close-up of Matt Damon's sweaty face were all packed to the brim with detail.

The 24GE exhibited an average brightness of 239 nits, which is a vast improvement over MSI's previous AG220 all-in-one (186 nits). However, the PC fell just behind our 246-nit average, and couldn't hold a candle to the Apple's 5K Retina iMac, which exuded a super-luminous 422 nits.

Fortunately, what the 24GE lacks in booming brightness, it makes up for in color quality. The PC is capable of displaying 128 percent of the sRGB color gamut, which is more than the 5K iMac (102.4 percent) and better than our 97 percent average.

The all-on-one's color accuracy proved even more impressive, with a Delta E rating of 0.29 (closer to zero is better). That's notably more accurate than the 5K iMac (2.2) as well as our all-on-one average of 6.

Whether I was gaming or blasting Taylor Swift, the 24GE's stereo speakers did an admirable job filling our testing lab with sound. When unashamedly rocking Swift's "Bad Blood," the song's bass and vocals came through clearly, though I noticed just a slight bit of distortion at max volume.

The speakers were just as apt for my Shadow of Mordor slaying sessions. The game's moody background strings came out crisp, as did the sound of my orc enemies getting their heads ripped off.

The 24GE's audio can be tweaked via the included Nahimic Audio Enhancer app, which lets you switch between presets for music, games and movies. You can go deeper if you like, adjusting individual parameters such as bass boost, reverb and voice clarity.

In order to ensure you can frag your friends right out of the box, the 24GE comes packed with a gaming keyboard and mouse. The DS4100 membrane keyboard sports a large, comfortable wrist rest below the keys, as well as LED backlights that light up in red, blue, green, yellow, baby blue, purple or white with the tap of a button.

While I liked the cozy soft-touch material that coats the entire keyboard, I found the keys themselves to be too mushy. Even with a generous travel of 2.4 millimeters and a fairly common actuation (required force) of 70 grams, I found that sometimes my key presses weren't registering with a normal amount of pressure, especially with the spacebar.

That didn't stop me from typing at 83 words per minute with 94 percent accuracy on the Key Hero Typing Test, but I found myself missing more keys than I'd like during my testing. Still, I didn't notice these problems much when using the WASD and spacebar keys to run and jump my way through BioShock Infinite.

Fortunately, the DS100 mouse fared much better overall, with an ergonomic design and snappy click buttons that offered satisfying feedback. The mouse has two extra thumb buttons on the left side for mapping extra functions, as well as two buttons below the scroll wheel that let you adjust the mouse's sensitivity on the fly.

Armed with an Nvidia GeForce GTX 960M processor with 2GB of VRAM, the 24GE has the power to play most mainstream games at decent settings. However, despite its 4K display, the desktop isn't exactly optimal for Ultra HD gaming.

I tried going all out at first, setting Shadow of Mordor to run at Ultra settings at 4K resolution. Doing so treated me to some pretty textures, but at an unplayable frame rate that hovered around 15 frames per second.

Things improved significantly when I dropped the resolution to 2560 x 1440 at medium graphics, which provided 40 fps gameplay while still looking pretty great. However, in order to get the game to consistently run above 60 fps, I had to lower the resolution to 1080p and the settings to low.

To put the 24GE's performance in perspective, we put it head-to-head with the Razer Blade, a gaming notebook with a comparable 970M GPU and $2,399 price tag.

The 24GE breezed through the BioShock Infinite benchmark at 1080p, registering a super-silky 102 frames per second on low graphics and a more-than-playable 71 frames per second on high. MSI's all-in-one trailed the 970M-powered Razer Blade's performance on low (128 fps), but matched the laptop's 71 fps on high.

MSI's all-in-one handled the more demanding Metro: Last Light at 1080p on low settings at an admirable 71 fps, but plummeted to 17 when we upped the graphics to high. The game ran at a less-than-ideal 23 fps at 4K on low settings, and wouldn't run at all at 4K on high settings.

As far as synthetic tests go, MSI's PC netted a 4,008 on the 3DMark Fire Strike benchmark. This trails the Blade (6,550) but crushes the average 1,013 scored by all-in-ones we've reviewed.

Powered by an Intel Core i7-4720HQ processor with 16GB of RAM, the 24GE plowed through any task I threw its way. I never experienced a hint of noticeable slowdown, even as I streamed Netflix, downloaded a game, performed a full system scan and jumped between 24 different Chrome tabs all at once.

MSI's desktop took 3 minutes and 49 seconds to match 20,000 names to their addresses on our spreadsheet test, trailing the Blade by just 3 seconds (3:46) while making quick work of our 7:14 all-in-one average.

The 24GE comes packed with MSI's Gaming Control Center app, which offers some handy features for customizing the PC to your liking. The app's ScenaMax mode lets you switch between four different display presets -- standard, cinema, gaming or eye care -- or adjust individual parameters like brightness and gamma yourself.

The app allows you to use the all-in-one as a wireless hotspot, and sports a useful Device Setting menu for adjusting headset volume and toggling the webcam and touch display on and off on the fly. You can also use Control Center to view the system's CPU and memory usage in real time, as well as set up quick-launch icons that let you get right to your favorite games or apps.

The MSI 24GE ($1,799 starting, $1,999 as reviewed) offers a brilliant 4K display and dependable gaming performance, but fails to bridge the gap between the two. Movies and Web pages look stunning on the machine's Ultra HD display but, due to the limitations of its GTX 960M graphics card, you'll have to stick to lower resolutions to run most mainstream games at decent frame rates.

If you're looking for ultimate picture quality and aren't as big on gaming, you can get Apple's even-sharper 5K iMac all-in-one for the same $1,999 price as our 24GE. And while MSI's machine proved less-than-ideal for 4K gaming, you can enjoy plenty of mainstream games at smooth settings by opting for the 1080p version of the 24GE, which starts at a much more inviting $1,299. MSI deserves credit for continuing to make gaming possible on all-in-ones, but 4K is a bit too much for its latest desktop to chew on.

Mike Andronico is an Associate Editor at Tom's Guide. When he's not writing about games, PCs and iOS, you can usually catch him playing Street Fighter. Follow Mike at @MikeAndronico. Follow us @TomsGuide, on Facebook and on Google+.