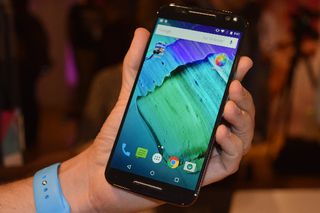 The Moto X is getting a makeover. Motorola has released the details of its upcoming flagship smartphone, the Moto X Style, hitting the US in September. It's a stylish new handset that is customizable to your liking, and it features a bigger display and beefed-up camera. It will also come in an unlocked version called the Pure Edition, which you'll be able to use on any major carrier. Here are the top new features of the Moto X Style:

The Moto X Style is supersized, yet sleek. It sports a 5.7-inch Quad-HD display that takes over the front of the handset, expanding edge to edge, making it appear even larger than it is. That's a big improvement to the 5.2-inch AMOLED display on the 2014 edition of the Moto X, and it places the Style against some of the most popular phablets on the market like the iPhone 6 Plus. The Style will also have a water resistant coating, which is a design feature the Moto X also had.

While we enjoyed the 13-megapixel rear camera on the Moto X, bigger is even better. The Style will have a 21MP camera that will perform better in low-lighting conditions thanks to an improved flash and algorithms that help it translate light more accurately. The front-facing camera is also getting an upgrade, from 2MP to 5MP, which is a great improvement for selfie-lovers. Motorola didn't compromise on speed in this new camera either — when we went hands-on with the Style, we were impressed with how quickly it snapped and saved photos.

A few smartphones, like the Galaxy S6, come with turbo charging that gives you a boost of battery when you're in a pinch for time. The Moto X Style's 3000 mAh battery will have this feature as well, and Motorola claims it's better and faster than most on the market. Word is that the Moto X Style can get 10 hours of battery life with just 15 minutes of charging — we're excited to test this feature out and see if it holds true.

Morotola is also stepping up the spec game in the Moto X Style. It will be powered by a hexa-core Snapdragon 808 processor, come with 3GB of RAM, and feature 16-, 32- and 64GB of internal storage. It will also house a microSD card, meaning you can outfit the handset with up to 128GB of storage. The processor is an improvement from the Snapdragon 801 chip in the Moto X, and a microSD card is always an added perk for those who need more space for big files like photos and videos.

This is where Motorola is trying to change the game — the company will sell the Style in two versions: the regular Moto X Style and the Moto X Pure Edition. The Pure Edition is an unlocked smartphone to be sold in the US online only at Motorola, Best Buy and Amazon for $399. That's about $200 less than an unlocked Galaxy S6. Also, both the Style and the Pure Edition will feature universal LTE, meaning you can switch carriers at any time — just pop in a new SIM card and you're ready to go.

For those who like to experiment with different wireless carriers, or for those who want to switch carriers soon, this is a convenient feature to have. It's also very common in other parts of the world to buy unlocked smartphones in this way, so Motorola is likely trying to bring that flexibility to US consumers in a flagship-level handset.

The Moto X Pure Edition will be available in the US in September for $399. Check Tom's Guide for full reviews of the smartphone as soon as it's released.