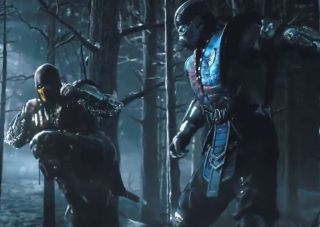 Fighting-game fanatics have reason to rejoice this morning (June 2). After weeks of rumors and teases, NetherRealm Studios has launched the first trailer for "Mortal Kombat X," marking the 10th official installment of the beloved bloody brawler. The game is set to hit shelves sometime in 2015 for Xbox One, Xbox 360, PS3, PS4 and PC.

The pre-rendered trailer shows eternal series rivals Scorpion and Sub-Zero duking it out in a frost-covered forest while a Wiz Khalifa song plays in the background. While there's no in-game footage, the scene hints at what we can expect in the final product. The two characters are still unleashing their signature moves, including Sub-Zero's ice ball and Scorpion's spear pull.

The X-Ray moves from 2011's "Mortal Kombat" look like they'll be back, as we see a gruesome close-up of Sub-Zero's insides after being rocked by Scorpion's teleport punch. The two ninjas can be seen using environmental objects to their advantage, something that was a major factor in NetherRealm's DC Comics fighter "Injustice: Gods Among Us."

Of course, it wouldn't be "Mortal Kombat" without a fatality, and Scorpion makes sure to give his opponent a deadly send-off at the end of the clip.

"Mortal Kombat X" will be the newest series installment since 2011's "Mortal Kombat," which was a massive rebirth for the franchise featuring a classic cast, tons of unlockables and a cinematic story mode. If last year's "Injustice" is any indication, all of those elements should return bigger than ever in "Mortal Kombat X." We're hoping to get our bloody paws on the game at E3, so stay tuned.