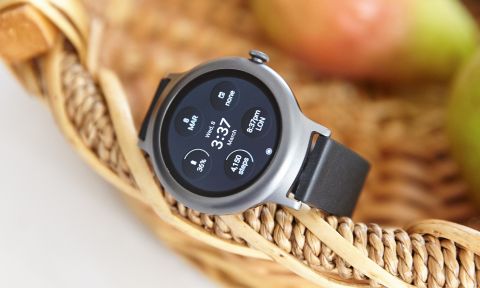 The LG Watch Style helps introduce Android 2.0 to the masses, but fails to make use of all of the features that the software supports.

The LG Watch Style is definitely a looker. Plus, the design of this smartwatch makes it versatile enough to match your ensemble whether you spend most of your day in a suit or in jeans and a T-shirt. Smartphone notifications, access to your calendar and the ability to quickly send text messages using your voice make the $249 Watch Style handy, but overall, it offers fewer features than people might expect from one of the first watches running Android Wear 2.0.

Apart from its obviously glowing face, the LG Watch Style looks very much like a classic analog watch. The version I tested has a titanium case and came with a black leather band, but it also comes in silver and rose gold, and offers you a choice of silicone or leather bands in a variety of colors.

Like a traditional watch, the Style has a crown on the side of the device. When you press it, the watch's 360 x 360 OLED screen lights up, and you can access dozens of apps from there. You can scroll by either using the touch screen, turning the crown or flicking your wrist (we'll talk more about that later).

Measuring 1.7 x 1.8 x 0.4 inches, the watch's case may seem surprisingly thin, but that's because there's not a whole lot going on in there. An accelerometer and gyroscope help you track your activity, and an ambient-light sensor lets the device automatically adjust screen brightness.

Compared with the LG Watch Sport, which measures 1.8 x 2.0 x 0.6, plus some thickness to its wristband, the LG Watch Style has a smaller battery, lacks NFC for mobile payments and lacks a heart rate monitor — the latter is the main reason the Watch Style manages to be so thin. It also lacks built-in LTE, which lets LG Watch Sport users make calls from their watch without needing their phone nearby.

The LG Watch Style isn't fully waterproof, but its IP67 water- and dust-resistance rating means that it should survive being submerged in 3.3 feet of water for up to 30 minutes. That's great if you stick with a silicone wristband, but if you choose a leather one, you may want to take the watch off before you jump in the shower. Without so much as a drop of water touching it, the band permanently wrinkled as soon as I put it on my wrist.

Available watch faces ranged from one that looked like a real mechanical watch, to one that could show me seven different stats in one glance, to a vibrant purple flower blossoming with three customizable shortcuts.

To change your watch face, you simply press the crown to turn the screen on and swipe to the right to scroll through your options. This was such a simple procedure — new for Android Wear 2.0 — that I changed my watch face by accident several times, which can happen when your shirt sleeves swipe across your screen.

The LG Watch Style doesn't let you rotate the screen orientation so that you can use the crown on the left side of the watch, which could be inconvenient for left-handed users. As a lefty wearing the watch on my right wrist, I found myself having to awkwardly reach across and around the screen to scroll using the crown, which I found more precise than scrolling with the touch screen. Also, while there was some resistance when I pushed down on the crown, I still found it all too easy to accidentally press it and open apps.

MORE: Our Favorite Smartwatches for iOS and Android

The Android Wear 2.0 smartphone app is pretty cut-and-dry. It's where you'll sync your phone to your watch; find apps that you can install on your smartwatch; and set up, adjust and turn off the smartphone notifications sent to your watch.

I found the preinstalled mail app useful. A tap on the envelope icon will take you straight to your inbox and show you at least part of the sender's name and the first few words of the email. Select an email and you can read the whole thing on your watch. There's no option to filter out recipients you don't want notifications from, so if your inbox gets jammed up with newsletters and promotional emails, you may not want to set up that option.

To respond to text messages you receive on the watch, you'll get the option to call the sender or reply. When you hit reply, you have the option to reply to the message via voice-to-text, emoji or a text, using either a tiny keyboard or by scribbling on the screen.

Using the keyboard felt like a joke, however. Even with small fingers and swype, which lets you draw a line between letters to spell words, I could only type one or two words correctly within a text message. I found scribbling letters on the touch screen easier, but that option is somewhat hidden; it appears as a globe icon when you bring up the keyboard.

Google Assistant is also available on smartwatches running Android Wear 2.0. On the LG Watch Style, you'll long-press the crown and be prompted to speak your request into the watch, or simply say "OK, Google" and state your request.

I found the ability to set a timer in the kitchen especially useful, and less cumbersome than working with messy hands while setting and trying to dismiss a smartphone timer. You can also set timers and alarms verbally by invoking your Google Assistant and saying something like, "Set a timer for 5 minutes from now."

I've found OK, Google to be a fairly trusty voice-recognition tool on my Samsung Galaxy S7, so I was disappointed by the LG Watch Style's inability to figure out what I was saying while I walked amid street traffic or while music was playing. Holding the watch less than an inch from my mouth was the most reliable way to dictate a message. When I held it farther away, the voice-to-text feature became iffy.

If your Google Assistant actually understands you, you can ask it to show you the weather forecast and how to navigate to a specific destination, if you have Google Maps installed on your watch as well. If you're listening to music or a podcast on your phone, touch-screen playback controls will show up on your watch, too.

You'll see a native browser app already on the watch, and some preset bookmarks, but you'll be prompted to buy a full version of the browser for $2.99, or pay a flat rate for a package of apps that includes a browser, calendar, mail and more for $12.99.

The Google Fit app comes preloaded on the LG Watch Style. There, you can set goals for a certain number of steps taken per day, minutes spent active, estimated miles traveled and calories burned. I found that step counting on the watch was fairly accurate: It logged 495 steps when I took 500.

Using Google Fit or Google Fit Workout, you can also activate a workout tracking mode to log your walking, running, cycling, stair climbing and other activities. Without heart rate monitoring, however, it may be difficult to gauge the intensity of your workout and get a good estimate of the number of calories you've burned. And without GPS tracking, it's far from our best pick for runners.

The LG Watch Style's 240-mAh battery lasted between 10 and 15 hours per day over the several days I tested it, depending on how many emails, text messages and notifications I sent and received, and how much I interacted with the watch in general. LG recommends charging the device at night so it'll last through most of the daytime, but it didn't specify how long a charge should last. To charge the watch, you'll rest the watch case on a "wireless" charging dock that can plug into the wall or a USB port.

As its name implies, the LG Watch Style is an attractive smartwatch that you can check your email and smartphone notifications on and send and receive messages from. Since Android users still can't use an Apple Watch — which is our top pick among smartwatches  — those with large wrists and a willingness to pay $100 more might consider the Samsung Gear S3, priced at about $350.

The $215 TomTom Spark 3 Cardio + Music GPS watch with a built-in heart rate monitor, music storage and free headphones could be a smarter choice as well.