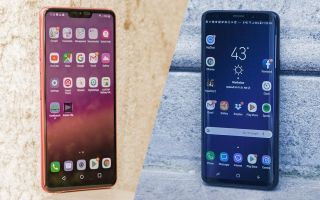 Calls:
+ International Connect PLUS
Texts:
Domestic and international text
Data:
Deprioritization applies during congestion
View
at
Boost Mobile
We check over 130 million products every day for the best prices
View All Deals
powered by

LG has announced its long-rumored G7 ThinQ, a premium Android smartphone with an expansive, ultra-bright 6.1-inch display, complete with an optional notch if you like the iPhone X’s design but prefer the freedom of Android. The G7 ThinQ is available to preorder starting May 24, but carriers haven’t announced pricing yet.

Can LG topple Samsung’s supremacy by packing its latest phone with everything you could ever want from an Android device with a dash of Apple’s signature style? Let’s take a look at how the G7 ThinQ stacks up to the Galaxy S9.

Samsung blazed a trail for smartphone design with its nearly edge-to-edge Infinity Display, which debuted with the Galaxy S8, but Apple’s iPhone X created a distinctive look with a top notch that hides the phone’s front-facing camera and handset speaker. Since the iPhone X’s launch last November, numerous Android devices have copied the love-it-or-hate-it feature. LG’s G7 ThinQ is the latest in that line of followers.

Both devices are all glass and support wireless charging. The G7 is a smidge more lightweight and slightly thinner than the S9 and S9+, but those devices feel a bit more premium when you hold them than the G7 does.

But the fact that Samsung didn’t copy Apple’s trendsetting design is also a big selling point. When you buy an S9, you get a Samsung phone’s distinctive look.

LG’s 6.1-inch notched LCD screen is fairly bright with ultra-thin bezels, but the curved 5.8-inch and 6.2-inch OLED panels on the S9 and S9+  dazzle with richer colors and deeper blacks than an LCD panel can achieve.

LG says the G7’s panel can reach up to 1,000 nits, which would make it the brightest smartphone we’ve ever tested. To compare, the S9 reached 603 nits in our testing. We’ll have to put the G7 through its paces with a light meter to see if LG’s hype lives up to reality.

The S9+ and G7 ThinQ feature dual-lens cameras with the ability to shoot portraits (or what Samsung calls Live Focus). You can change the focus of the photo after shooting on both devices. The S9 can’t shoot portraits. But the dual-lens camera systems on the S9+ and G7 differ in one key way: the S9’s secondary camera is a 12-MP telephoto lens that can shoot 2x optical zoom. The G7 doesn’t have a telephoto lens; instead, it sports a 16-MP wide-angle lens with a 107-degree field of view to reduce the distortion that can accompany wide-angle shots.

Both the S9 and the G7 ThinQ promise brighter photos in low-light conditions, but the two devices take different approaches to help you avoid the awkwardness of using flash. The S9 12-MP lens has a variable aperture which automatically adjusts from f/1.5 to f/2.4 to let in more light. The S9+ performed well in our low-light camera tests, where it was pitted against the iPhone X and Google Pixel 2 XL. The Pixel won that round, but the S9 bested the iPhone X.

The G7 ThinQ’s 16-MP camera system uses what LG calls pixel binning, which combines four pixels into one super-pixel to quadruple the camera’s light sensitivity. We haven’t yet been able to test a shipping version of the G7, but in our hands-on time with a demo unit, the G7 was able to capture an image in near total darkness that looked like it was illuminated by flash.

Samsung and LG are emphasizing the smarts in their smartphones with voice-activated assistants that can answer your queries when the press of a button. The S9 and G7 ThinQ have dedicated hardware buttons that trigger their respective assistants — Bixby on the S9 and a custom variation on Google Assistant in the G7 — that can’t be programmed to perform other tasks. The G7’s Assistant integration goes one step further by launching Google Lens when you double press the button. LG also worked with Google to create 32 G7-specific commands, several of which are designed to help you take photos faster. Some of the requests Google Assistant can handle on the G7 include, "Open camera with AI cam," "Take a photo with low-light mode," "Take a photo with food mode" and "Take a photo with portrait mode."

Samsung added two unique camera features to the S9, but unfortunately, they’re hit-or-miss. The S9 can create AR emoji based on your facial features and expressions. These emoji are essentially cartoon avatars that you can customize with your hairstyle and clothing, and the movement of your face animates them as you speak. You can share videos of your emoji via text or on social media. But the emoji are actually a little weird in reality.

The second feature is super slow-motion video, which slows 0.2-second video clips down to 960 frames per second. The result is a dramatic, 6-second slow-motion clip. But again, this sounds cooler in theory than it is in practice. It’s tough to time the right moment to start shooting in slow-motion. The S9 has an automatic mode that’s supposed to capture motion as it enters the frame, but it’s not reliable.

The G7’s special features are a little more useful, particularly the audio-focused ones. The device sports an ultra-loud, bass-heavy Boombox speaker, which actually vibrates in your hand as you play music. It also offers DTS-X virtual surround sound, which makes music seem like it’s coming from all around you when using wired headphones.

The S9 and G7 ThinQ are both shipping with Qualcomm’s latest Snapdragon 845 chip with 4GB of RAM (the S9+ offers 6GB). The 845 makes Android smartphones powerful and incredibly fast, able to handle app-switching, gaming and streaming with ease. While we haven’t tested the G7’s performance yet, the S9 hit 7,276 and the S9+ reached 8,295 on the Geekbench 4 test of overall system performance. That’s better than the Galaxy Note 8’s score of 6,564 and the Pixel 2 XL’s score of 6,282. (Both of those devices sport Qualcomm’s older Snapdragon 835 processor.)

We expect the G7’s benchmarks to match the Galaxy S9’s, while the S9+ will likely pull ahead thanks to its extra RAM.

The G7 ThinQ shares many of the S9’s features, including an expansive display, powerful processor and dual-lens camera with special low-light capturing capabilities. But we still don’t know the G7’s price and haven’t put the device through its paces on the Tom’s Guide suite of tests. The S9 is the early winner in this match-up, thanks to its sleeker design and more colorful OLED display, but if the G7 impresses in our performance, battery and camera tests, it could become the Android flagship to beat.

Stay tuned for our full review and rating.

Calls:
+ International Connect PLUS
Texts:
Domestic and international text
Data:
Deprioritization applies during congestion
View
at
Boost Mobile
We check over 130 million products every day for the best prices
View All Deals
powered by