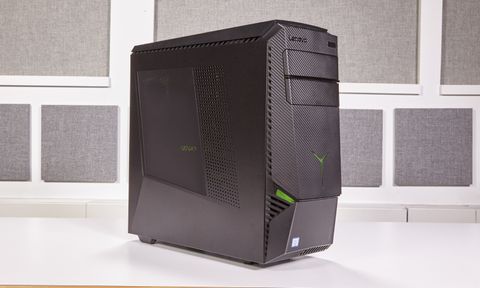 Lenovo's Ideacentre Y900 has long been a solid option for gamers seeking a powerful, easy-to-upgrade desktop, but it always looked bland and seemed a bit overpriced. With the Y900 Razer Edition, that's no longer the case.

This special version of Lenovo's flagship PC can glow millions of colors, thanks to Razer's Chroma lighting, and can sync up with the high-end Razer mouse and keyboard that are included. Add an Intel Core i7 processor and an Nvidia GTX 1080 GPU, and you've got a 4K gaming and VR-ready machine that offers a whole lot for its premium price.

The Ideacentre Y900 Razer Edition is pretty much the standard Y900 with, well, a whole bunch of Razer added in. You get the same black, sharply angled chassis, except the system's red USB ports are now green, and its formerly all-red LED lights now glow the entire rainbow, thanks to Razer's Chroma software. Considering how hard it is to find a gaming desktop that doesn't beat you over the head with black and red, the Y900 Razer Edition is mighty refreshing.

As with most Razer products, the Y900 RE offers a ton of neat, customizable lighting options via the preinstalled Synapse app. You can program the desktop's front LED lights to glow a single color statically, pulsate in and out, or run through a whole gamut of colors via Razer's Spectrum Cycling mode. Best of all, you can sync up the machine's lighting with the included Razer BlackWidow keyboard and Mamba mouse. As a peripheral geek, there was something majestic about seeing my mouse, keyboard and desktop all change colors in perfect unison.

At 19.8 x 18.9 x 8.1 inches, the Y900 demands a good deal of desk space. It's not quite as towering as Acer's scaly Predator G6, but makes the Alienware Aurora look compact by comparison. The Y900 weighs a hefty 33 pounds, which is about standard for PCs this size, but isn't very hard to carry as it comes with a convenient handle at the top.

They might have a new green tint, but the Y900 RE's ports have the same convenient layout as previous models. In the front, you've got four USB 3.0 ports, a 7-in-1 card reader and microphone and headphone jacks.

Around the back, you'll find two additional USB 3.0 ports as well as four USB 2.0 ports. (Lenovo doesn't seem to be embracing USB Type C for gaming desktops quite yet.) There's also an Ethernet jack, a PS/2 port for old-school accessories and a full suite of surround-sound audio ports. The machine's Nvidia GTX 1080 graphics card packs its usual three DisplayPorts and single HDMI port, giving you plenty of options for connecting to monitors.

If you're screwdriver-averse, know that upgrading the Y900 is an absolute breeze. The desktop's side panel pops off with the press of a button, giving you access to the machine's graphics card, RAM and storage bays without any grueling work.

You can even remove the GPU tool-free, thanks to a series of removable plugs and plates that hold the graphics card in place. The process isn't quite as seamless as using the swinging GPU door found on the Alienware Aurora and the Dell XPS Tower, and I worry that gamers might lose some of the Y900's moving parts. Still, I appreciate that you can replace almost all of the machine's key components without any tools.

Packed-in peripherals are usually an afterthought on most gaming desktops, but on the Y900 RE, they're one of the main selling points. Lenovo's PC includes Razer's excellent BlackWidow Chroma keyboard and Mamba Tournament Edition mouse, two feature-rich, premium accessories that would cost you about $215 separately.

The BlackWidow and Mamba are among our top picks for keyboards and mice, respectively, and it's easy to see why. The BlackWidow's mechanical keys are wonderfully clackety, and its five programmable macro buttons make it easy to perform complex actions on the fly. I flew through a typing test on the keyboard at 93 words per minute with close to perfect accuracy, and never once felt cramped up.

The Mamba is similarly responsive and comfortable, with an ergonomic design, two useful thumb buttons on the left, and DPI buttons on the center that let you easily adjust the sensitivity.

Both accessories are wonderfully easy to customize via the included Synapse app, and not just regarding the fancy lighting. You can remap virtually all of the Mamba's buttons and create shortcuts and macros for the WidowMaker, and both accessories allow you to create game-specific profiles that automatically load up settings when you launch your favorite titles. Many popular games, such as Overwatch, Rise of the Tomb Raider and Call of Duty: Black Ops 3, offer custom-lighting profiles that automatically activate when you fire them up.

I expected outstanding gaming performance from the Y900 RE's Nvidia GeForce GTX 1080 graphics card, and I was not disappointed.

Lenovo's desktop handled the graphically stunning Battlefield 1 at a steady 30 frames per second at 4K, which made the game's snowy Alps and war-torn beaches look startlingly lifelike. After wiping the drool from my face, I lowered the game to a still-gorgeous 2560 x 1440 and was able to battle through the trenches at an even smoother 60 fps.

The Y900 is more than ready for virtual reality, scoring an 11 on the SteamVR Performance Test. That's the highest score we've seen yet, and is on a par with both the Aurora and the Predator G1. Valve's performance test runs each machine through a brief Portal-themed demo, and awards a rating based on frame rate and fidelity. To put that score in perspective, GTX 1070-based machines typically score between 10 and 11, while older GTX 970 desktops land closer to 6.

Armed with an Intel Core i7-6700K processor and 16GB of RAM, the Y900 RE is just as apt at juggling tasks as it is at running games at gorgeous settings. The system never slowed or crashed under heavy use, even as I streamed four Twitch broadcasts, downloaded a game, ran a full system scan and hopped between Google Docs and emails.

To put the Y900 RE's $2,499 price in perspective, a similarly configured Alienware Aurora would cost about $2,349. That makes the Aurora about $150 cheaper than the Y900, but that extra $150 is going toward a premium Razer mouse and keyboard set that would normally cost more than $200. At the same time, the Aurora is a little more compact and offers slightly easier upgradability, so it comes down to which features you value most.

Complementing Razer's Synapse app is Lenovo's own Nerve Center utility, which provides a quick glance at the PC's key specs and lets you easily monitor and tweak performance. You can use this app to overclock the machine, as well as program which apps and games should get network-speed priority when they're running. If you have a Lenovo gaming monitor connected, you can use the Nerve center to adjust display modes and activate on-screen extras, such as cross hairs.

Aside from Synapse, Nerve and Lenovo's usual handful of settings apps, the Y900 is fairly free of bloatware.

The Y900 Razer Edition is pricey, but it comes with everything you need to have a premium PC gaming experience. Its included Razer mouse and keyboard are an excellent value, and look fantastic when lighting up in unison with the PC. The Y900's Core i7 processor and GTX 1080 GPU can handle VR and 4K gaming with no sweat, and you'll have no trouble replacing them down the line, thanks to the system's easy to upgrade chassis.

If you're not a Razer fan or already have a good gaming mouse and keyboard, you can probably give the Y900 RE a pass. The standard Y900 can be had for hundreds less, and there are plenty of competing desktops that offer even better upgradability (Alienware Aurora, $2,554 as reviewed) or more compact designs (Acer Predator G1, $2,299 as reviewed) with similar specs. Still, the Y900's slick LED lighting and fantastic Razer peripherals make it the best version of Lenovo's gaming desktop yet.