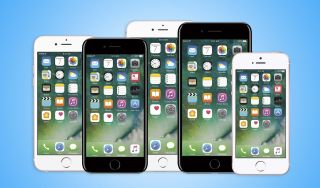 Apple has never had a broader assortment of phones available than it does now, which is good if you're looking for options but challenging if you're trying to figure out what to get. If you want the latest and greatest, there's the iPhone 7 and iPhone 7 Plus, with their water-resistant designs, faster processors and improved cameras.

Looking to save some dough instead? Apple has cut the price on the year-old iPhone 6s and 6s Plus by $100 each while also boosting the capacity of those phones. Then there's the iPhone SE, which at $399 is a very good value, especially for those who prefer compact designs.

Which iPhone is right for you? Let's break it down.

What's the Same?
Both the iPhone 7 and iPhone 7 Plus sport water-resistant designs that can easily withstand splashes, rain or a drop in the toilet. There's also a new Home button that provides haptic feedback; it feels weird but works fine. Both models ditch the headphone jack, though there's a Lightning adapter in the box for your existing headphones.

When it comes to shooting photos, the iPhone 7 and iPhone 7 Plus offer better image quality in low-light situations than their predecessors do, thanks to a wider f/1.8 aperture and optical image stabilization on both models. (Before, OIS was on the Plus model only.) You should also expect sharper selfies from the front 7-MP shooter.

Both phones also benefit from a fast new A10 Fusion processor that makes your 2-year-old iPhone 6 look downright pokey when opening apps. And the iPhone 7 and iPhone 7 have brighter displays that support a wider color gamut.

Care about your phone looking new? Apple offers matte-black and glossy, jet-black options for the iPhone 7 and iPhone 7 Plus, which you can't get on other iPhones. Just keep in mind that the jet-black option is available only if you opt for 128GB of storage or more; 32GB is standard.

What's Different?
The biggest difference between the iPhone 7 and the iPhone 7 Plus is screen size, and consequently, how big each phone feels. If you want a phone you can easily use with one hand, the answer is simple: Get the cheaper 4.7-inch iPhone 7. But if you're on the fence, the 5.5-inch Plus has three key advantages that shouldn't be ignored.

MORE: iPhone 7 vs. iPhone 7 Plus: Which One Should You Buy?

First, the iPhone 7 Plus has a bigger and sharper full-HD display that makes it better for watching video, surfing the web and typing with fewer errors. Second, the iPhone 7 Plus has room for a bigger battery, which allowed this phone to last an hour and a half longer on our battery test (web surfing over LTE). That's the difference between having to find an outlet in the late afternoon or evening and blissfully continuing to game or post to Instagram.

The reason we truly prefer the iPhone 7 Plus, though, is its dual-camera system, which gives you a true 2x optical zoom. That means you can get closer to your subjects without losing detail; also, the Plus offers an artistic Portrait mode that can blur out the background.

Our Advice: While the iPhone 7 Plus is more expensive and larger, its advantages more than justify the higher cost.

What's the Same?
Press the screen harder than usual on the iPhone 6s and iPhone 6s, and you'll experience 3D Touch, which lets you do things like preview web pages from an email, adjust the flashlight intensity or quickly check the weather. All it takes is a deep press on an icon or link to discover all sorts of shortcuts, and there are a decent number of games and apps that take advantage of 3D Touch, too.

The other big upgrade versus the iPhone 6 on the 6s and 6s Plus is Live Photos. The 12-MP camera records video before and after each still shot, and you can see and hear what was happening at the time by long-pressing on the screen when scrolling through your gallery. Some services and websites support Live Photos, too, such as Facebook and Tumblr. (It's worth noting if you're upgrading from earlier iPhones that both the iPhone 7 and 7 Plus retain these two features as well.)

Both the iPhone 6s and 6s Plus are built fairly tough, thanks to having stronger glass on the front than the iPhone 6, and 7000 series aluminum on the back. Apple also introduced Rose Gold for the first time on an iPhone with this series.

What's Different
In addition to a larger and sharper display, the iPhone 6s Plus features optical image stabilization for the camera, which means steadier images and also higher-quality pics in low light.

As with the iPhone 7 Plus, the iPhone 6s Plus also offers longer battery life than its smaller sibling. In this case, we're talking about a more than 2-hour difference in endurance.

Our Advice: Get the iPhone 6s if you A) want a smaller phone and B) would rather put any extra money toward additional storage. (The 128GB iPhone 6s costs as much as the 32GB 6s Plus.) The iPhone 6s Plus is better for those who prefer a bigger display and longer battery life.

What's the Same?
Don't be fooled by the iPhone SE's small stature. This 4-inch phone packs the same fast A9 processor as the iPhone 6s and the same excellent 12-MP camera with Live Photo support. The screen resolution seems low, at 1136 x 640, but that's what the iPhone 7 offers, too.

What's Different?
The iPhone SE is now the only phone Apple sells that comes with just 16GB of storage, though you can spend $50 more to get 64GB after Apple lowered the price on that model. And while the back camera is great, the front camera has a resolution of just 1.2-megapixels, which can make for fuzzy selfies.

Also keep in mind that the iPhone SE doesn't feature a 3D Touch display, though for the price, that seems like a fair trade-off.

Our Advice: The iPhone SE is a great bargain for those who prefer a smaller screen, and it's also a great starter iPhone for tweens and teens.