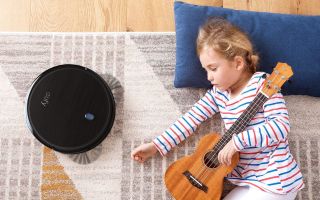 Robot vacuums are handy devices for helping keep your home or apartment floors swept in between those deep-cleanings that you've been putting off for a month.

The RoboVac 11S is the least expensive robot vacuum offered by Eufy. At $219 ($229 for the white model), it's relatively affordable — top-tier models, such as the Samsung PowerBot and the Roomba 690, cost upward of $300 — and, according to our preliminary lab tests, does a good job at picking up Cheerios and kitty litter, but not so much with pet hair.

With a height of 2.85 inches, the 11S — the S stands for slim — is one of the lower-profile robot vacuums out there, meaning it shouldn't have any trouble getting under furniture, such as couches, where dust bunnies lurk.

As this is  a lower-priced robot vacuum, you have to accept some compromises. For one, while it has a remote control, the 11S is not a "smart" vacuum, so you can't control it with your smartphone or with a voice assistant such as Alexa or Google Assistant. For those features, you'll have to spend about $70 more on the RoboVac 11C ($299), whose app also lets you set a schedule for when the vacuum runs.

Takeaway: "While you won't find advanced features like app or voice control, the RoboVac 11s is one of the quietest vacuums we've tested, and small enough to clean under just about everything in your home."

Takeaway: "The Eufy Robovac 11S is a basic, no-nonsense robot vacuum sold at a low price. It's not smart, but it's effective."

Takeaway: "There are 'smarter' robot vacuums with sexy apps and voice-control capabilities, but ultimately it's the cleaning that counts. And in that regard the Eufy RoboVac 11s holds its own with the best of them."

On Amazon, more than 750 reviewers have given it an average rating of 4.5 stars, but Fakespot gave them a rating of D, and ReviewMeta also thought there were a number of unnatural reviews. So take them with a grain of salt.

MORE: Robot Vacuum Buying Guide: What You Need to Know

Still, we liked the 11S' predecessor, the Robovac 11. Although it did not do well  picking up pet hair, it performed better than other budget vacuums in other areas.

While we're going to reserve our final judgment until we've concluded all our tests, our initial impression of the Eufy RoboVac 11S is generally favorable. If you're looking to spend around $200 on a robot vacuum, it's a good bet, as long as you don't mind the trade-offs.