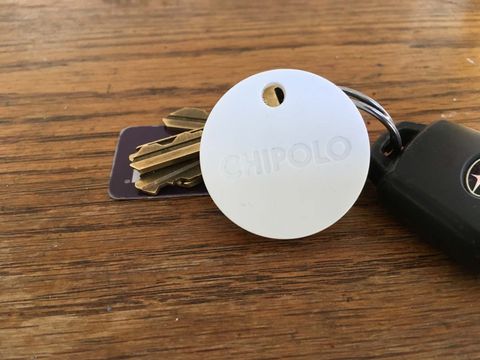 This key finder has a loud alarm, which helps it hold its own against top-rated trackers from Tile and TrackR.

Updated, Jan. 7: Chipolo has announced a new tracker, the Chipolo One, that costs the same as the Chipolo Plus, but adds several improvements like a removable battery, louder alarm and free out-of-range alerts. Here's our review of the Chipolo Plus from 2017.

Beyond a splash of color, there wasn't much to recommend the original Chipolo, whose lackluster performance kept it firmly in the middle of the key finder pack. Things have improved dramatically with the $25 Chipolo Plus, which complements the key finder's loud alarm with much better range. It's still not the best key finder we've tested — that honor still goes to the latest trackers from Tile — but it's a good alternative.

An update to the mobile app that accompanies Chipolo makes it much easier to manage your key finder. (Under the version of the app I tested, geofencing features that had been pretty hit or miss previously are now in beta form so that Chipolo can improve the accuracy. I'll update this review once geofencing is ready for prime time again.) Chipolo has also branched out into a thin tracker you slip inside a wallet called the Chipolo Card ($35) that's similar to the Tile Slim or TrackR Wallet.

What's New with the Chipolo Plus

Chipolo has gone with a sturdy design for the Plus, which at 1.5 inches in diameter and 0.23 inches thick is fractionally larger than the original. You could pull apart the old version to replace its battery, but the Plus is completely sealed. That means it's water-resistant — the Chipolo Plus can withstand sprays of water, though you wouldn't want to submerge it. It also means that after a year, you'll have to replace your Chipolo Plus with a new one when the battery dies. (Chipolo has a renewal program where it will sell you a new Plus at half-off.)

In the last month, Chipolo has noted that some Plus models haven't reached the full year of promised battery life. To the company's credit, it contacted owners of the Plus and offered to replace the key tracker free of charge.

The Chipolo Plus is clickable, meaning you can press on the device to activate its two-way finding feature for locating your misplaced smartphone, or for turning the Chipolo into a remote shutter for your phone's camera. (The Pebblebee Honey offers that same capability.) You set up that feature using the companion app for Android and iOS devices. That's a vast improvement over the original Chipolo, which was button-free and required you to shake the device violently whenever you wanted to use those features.

If the thought of a non-replaceable battery bums you out, you can opt for the Chipolo Classic instead. It costs the same as the Plus, and adds the helpful button feature for finding your phone. The battery lasts only six months, though, and you should keep the Classic away from water. Both the Classic and the Plus now come in a multitude of colors.

An update has vastly improved the Chipolo app, which used to require some digging to enable features. The new version keeps things fairly minimal, while making it easy to set up and manage multiple trackers.

How the Chipolo Plus Performs

As with other key finders, you attach the Chipolo Plus to your keys (or whatever valuable you care to keep track off) and pair the device via Bluetooth with your smartphone. A press of the button in the Chipolo app triggers a loud alarm — it's 100 dB, according to Chipolo, which makes it louder than the Tile Mate and TrackR Bravo — that lets you find the misplaced item. In an improvement from the original Chipolo, the Plus alarm doesn't stop after 10 seconds, but keeps blaring until you tap a button in the app to make it stop.

Even after burying my Chipolo Plus in a pile of laundry, I could still hear that alarm loud and clear, even from another room in my house. It was also clearly audible from 60 feet away in a busy public park. If you opt for the Chipolo Card, note that it's not as loud as the Plus — I had a hard time hearing the Card from 40 feet away in that same park.

I was able to stay connected to my Chipolo Plus for an average of 66 feet — on a par with the range of the Tile Mate. I was particularly impressed by how quickly I could reconnect with the Plus after moving back into range, usually within 5 to 10 feet. That  can be very helpful for tracking down items you've left behind. The wallet-friendly Chipolo Card has slightly less range than the Chipolo Plus, dropping its connection at around 55 feet or so.

Previous versions of the Chipolo app included a geofence feature that sent an alert to your phone should you walk outside the range of the tracker. In earlier testing, I found a significant delay from when I lost that connection to when the notification popped up on my phone. Perhaps that's why the feature is back in beta in the version of the app I just tested. Given the problems I had with the geofence feature, I can't say that I missed it all that much.

While Tile's many trackers, including the more expensive Pro series, do a better overall job of keeping tabs on where your keys are, it's impossible to overemphasize how Chipolo has improved its own key finder and the improvements to the companion app suggest that the company isn't through making improvements. The Chipolo Plus elevates this product from also-ran to contender. And it comes in such pretty colors, too!