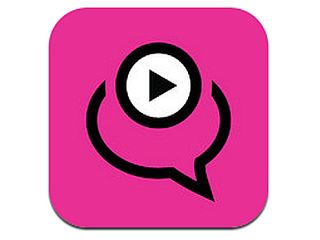 Take a stroll through Tumblr and you'll find volumes of boobs, GIFs and a combination of both. Luckily the GIF craze has seemingly stayed within the borders of Yahoo's recent blog-based acquisition, although some of these creative animated shorts -- which ruled the Internet long before Flash arrived to bog down RAM -- occasionally spill into each other's social networks.

App developer Pinger has taken that craze for jiffy animated images and stuffed them into a texting app called GIF Chat. Pinger is actually the developer behind the popular app that allows iOS and Android devices to make calls and send text messages, so naturally GIF Chat is a step up. There are no social networks involved, so animated GIF images are sent privately to friends who are also using the same network.

"Consumers are looking for fun, expressive and private ways to communicate," said Greg Woock, co-founder and CEO of Pinger. "GIF Chat uniquely combines a number of the features that users around the world are looking for -- video messaging, unlimited texting and the ability to control who sees the message and when it disappears."

The app is extremely simple: merely hit the red button and take a six second "video" of anything. Users can speed up and slow down the animation, and have it cycle in an infinite loop -- there are no other filters to spice things up. Once the clip is finished, the user hits the send button, adds text, and chooses the appropriate destination.

Pinger said that GIF Chat users are in complete control of who sees their video content and how many times it can be viewed -- videos can even self-destruct after a certain set time. This is an interesting feature given the potential problems GIF Chat could bring: could this app propel sexting to a whole new level which, when directed, can cover up the evidence after viewing?

On Thursday, the company indicated that the GIF Chat launch is the first step in a larger rollout. "GIF Chat is the first app developed for use on the new Pinger Network, the company’s unified messaging and monetization platform, which allows users of all Pinger apps to communicate for free with one another, regardless of the Pinger app they’re using," the company said.

Pinger is also launching two additional messaging apps: JukeVox Messenger and Free Style Messenger. The former allows users to record voice messages, apply sound effects such as a siren or voice changers, and send them to friends. Users can completely customize how texts appear upon receipt -- from font and color options to background colors to animated smileys and live-action GIFs.

Thus, no matter what app is used -- GIF Chat, JukeVox, Free Style or other Pinger-developed apps rolled out in the future -- Pinger Network customers will have a universal messaging inbox that can be accessed by any Pinger Network app.

"Consumers have demonstrated their interest in installing and using multiple messaging apps if they have the features they desire," the company said. "But they also want to be able to easily connect with the key people in their network. The Pinger Network addresses this consumer need. Over time, Pinger will introduce many apps, each of which will provide a limited, but powerful set of features."

All three apps are available on Apple's App Store for iOS. The Android versions will hit Google Play sometime later this month.