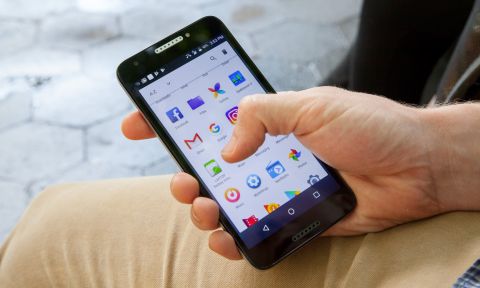 Considering how little you're paying for it, the A30 Plus gets the job done as a budget smartphone, but competitors offer more standout features.

Five years ago, the prospect of snagging an unlocked smartphone for less than $100 was almost unthinkable. But technology has come a long way, and it's led us to Alcatel's latest bargain, the A30 Plus. The first thing you'll notice about this Android phone is its price — just $80, if you buy it through Amazon’s ad-supported Prime Exclusives program. The standard unlocked version of the A30 Plus costs $130.

Truthfully, that price tag is the only thing you'll notice. The A30 Plus is about as budget as budget gets. If you're looking to spend as little as possible and don't need a particularly fast or flashy smartphone, this device will get the job done. Still, other options offer better value.

Design: Cheap, at a cheap price

The A30 Plus is clad in plastic all over, and there's no mistaking it for anything more premium. In this phone, Alcatel has somewhat tried to emulate the look of the company's higher-end Idol 5S, but with cheaper materials. Silver plastic has replaced the 5S's aluminum band, and the glass back has been scrubbed in favor of a textured, removable cover. At 5.57 ounces and about 0.33 inches thick, the A30 Plus isn't as slim or light as the Idol 5S, either.

Overall, the A30 Plus doesn't look great. The housings for the earpiece and microphone are strangely finished in different colors, while the back feels tacky. A soft-touch surface might have been less visually distinctive but would have made the phone a little more pleasing to hold.

Clad in plastic all over, the A30 Plus will not get mistaken for anything more premium.

On the front of the A30 Plus, you'll find a roomy, 5.5-inch display with unsurprisingly chunky bezels. Disappointingly, a fingerprint sensor is nowhere to be found. While budget phones historically have lacked that feature, lately it's appeared in more devices below the $200 mark, like the Moto E4 and ZTE Blade Z Max.

Display: Falls short of the competition

As its name suggests, the A30 Plus is the larger sibling of Alcatel's $99 A30, and one of the main differences between those two devices is screen size. Whereas the A30 features a 5-inch, 720p LCD display, the A30 Plus' panel is larger, at 5.5 inches. The low resolution is common among handsets this cheap, but you really begin to notice it on the Plus' larger screen.

The colors in the latest trailer for Star Wars: The Last Jedi definitely lacked some punch on the A30 Plus' display. If you prefer vibrant, over-saturated hues, you'll be disappointed by the Alcatel's more muted palette.

Color reproduction was respectable, though easily outclassed by one of the A30's primary competitors, the Moto E4. Alcatel's offering reproduced 110 percent of the sRGB color gamut (higher is better) and registered a Delta-E score of 1.03 (closer to zero is better). That's not too shabby for an LCD panel in a budget device, but it falls short of the Moto E4's results of 125 percent and 0.26, respectively.

Brightness tells a similar story. The A30 averaged 371 nits in our testing. That's a little better better than the Blu R1 Plus' 364 nits, but again far short of the Moto E4 and its 503 nits.

Nowhere is the A30 Plus' budget status more apparent than in its overall performance. This phone is powered by MediaTek's MTK6738 processor — which falls in the same category as Qualcomm's Snapdragon 425 — along with 2GB of RAM, and it's not particularly hard to push this device to its limit.

Some cheap phones, like the aforementioned Moto E4, have squeezed a smooth user experience out of similarly modest hardware. So we were a bit surprised to find scrolling lag in Chrome on our A30 Plus, as well as a 4- to 5-second wait when opening some apps.

On Geekbench 4, which measures overall performance, the A30 turned in a multicore result of 1,707, — just shy of the Moto E4's 1,711. Graphics testing was more illustrative: The A30 Plus scored a 6,599 on 3D Mark's Ice Storm Unlimited benchmark. That was enough to outperform the similarly specced Blu R1 Plus, which managed a score of 3,723.

It's not particularly hard to push the A30 Plus and its MediaTek MTK6738 processor to the limit.

In actual use, however, the A30 Plus isn't much of a graphics powerhouse. Specifically, graphic-intensive games are out of the question, as the A30 Plus couldn't muster a playable frame rate on CSR Racing 2. Thankfully, less visually demanding titles, like Super Mario Run, were much more manageable.

For storage, the A30 Plus packs 16GB of internal memory — about 10GB of which was free when we booted up the phone for the first time. You'll likely need extra space, so fortunately there's a microSD slot on board, which provides up to an additional 32GB.

Around the back of the A30 Plus, you'll find a 13-megapixel shooter that, like many budget-phone cameras, performs adequately only in ideal scenarios. Non-HDR captures are quick, and there's no viewfinder lag when lighting is plentiful. But low-light photo opps grind the experience to a halt, turning the result into a hazy, noisy mess.

You need to manually activate HDR, though this only made our shots worse on a cloudy afternoon in New York. Flipping HDR on returned some detail in the sky, which had been blown out in pure white.

However, that came at the cost of washing out every building in the frame, turning the city into a bleak, grungy, almost apocalyptic scene. To make matters worse, HDR exposures take far too look to capture and process, a problem for people with shaky hands.

There's little more to say about the 5-MP, front-facing camera, though it does come with its own flash, which is a nice bonus.

On paper, the A30 Plus has a decently sized battery, rated at 3,000 mAh. Because this battery is paired with one of MediaTek's more efficient chipsets, we didn't expect the A30 Plus to lack longevity. Unfortunately, the results in our battery test didn't live up to that hope; Alcatel's handset lasted for just 6 hours and 41 minutes of continuous web surfing on Verizon's LTE network.

That's well below the smartphone average of 9:40. The budget-priced Blu R1 Plus lasted 10:36 with similar hardware and a bigger battery. Meanwhile, the Moto E4 was right on par with the A30 Plus, topping out at 6:42.

The A30 Plus runs Android 7.0 Nougat, which is no longer the latest version of Google's OS now that Android Oreo is out. While more-expensive devices should receive updates, Alcatel doesn't have the best track record when of keeping its devices on the current firmware — especially toward the lower end of the market. TCL, Alcatel's parent company, couldn't confirm that the phone would be updated to Oreo when we asked.

With that in mind, it's encouraging to know Alcatel has limited customizations to stock Android with the A30 Plus. You'll find a different launcher than what you'd typically get from a Google-branded device, as well as a suite of the manufacturer's own apps. Otherwise, there's no bloatware to speak of.

Alcatel has limited its customizations to stock Android with the A30 Plus.

If you spring for the Amazon Prime Exclusive variant, you'll be served ads on your lock screen and some additional preloaded apps in exchange for a $50 savings off the $130 price of the unlocked phone.

The A30 Plus can be purchased in two flavors: unlocked, for $130, or in Amazon Prime Exclusive configuration, for $80. The cheaper option is a deal available only to Prime members, though Amazon will give you a $50 gift card if you're not already subscribed and you sign up for the service at checkout. Whichever model you get, both are sold only through Amazon, and will work on either GSM or CDMA cellular networks.

The A30 Plus isn't offensively flawed in any way, but when the competition is pushing more value across the board, it becomes much harder to recommend this phone. For the same price as the unlocked A30 Plus, you can have the Moto E4, which we prefer for its fingerprint sensor, more vibrant display, better software experience and tasteful design.

Spend $160, and there's the Blu R1 Plus and its much longer-lasting battery. If longevity is your priority, we'd also recommend Moto's $180 E4 Plus. With a massive, 5,000-mAh battery packed in, the E4 Plus can easily deliver two to three days' worth of use on a single charge. If your budget is flexible, all of those devices are worth the added expense.

If lock-screen ads don't bother you, there's certainly an argument to be made for the Amazon-branded variant of the A30 Plus, provided you're willing to live with the trade-offs that other budget phones don't ask you to make.