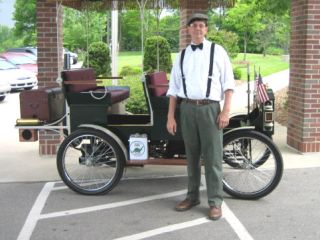 Based out of Louisville, Kentucky, Ferry runs a family-owned shop that builds industrial machinery. According to the Google blog, building "horseless carriages" has been his passion on the side for years. He's also an active member of an Internet group comprising of horseless carriage replica builders who share photos and ideas with each other.

Ferry claims he built his "antique" car from scratch using out-of-print, archived copies of Popular Science, Popular Mechanics, Horseless Age, Harper's gasoline engine book and other references. Originally he began the project using plans obtained from another replica car-builder, but decided to add "original qualities" that weren't listed in the specs. That said, he was directed to Google Books where he discovered and eventually downloaded old books and magazine to his iPad via the Google Books app.

"My car is powered by a 17-year-old Briggs & Stratton 12 HP engine and a hydrostatic transmission from a 15-20-year-old Craftsman riding mower," he said. "It is steered with a tiller arm (no steering wheel) and reaches a blazing top speed of about 6-7 miles per hour."

Despite the usefulness of virtual books, Ferry still professes his love for the old-school physical versions, the ones with breakable spines and paper pages to soil with coffee drips and chocolate chip muffin fingers. Still, ebooks are convenient and easy to locate when searching for "obscure and useful information."