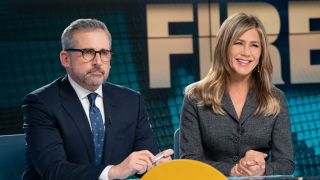 I did not expect my London trip to start like this: practically frozen to my iPhone's screen, lying lazily in a hotel room. But there I was, biting my nails at the outcome of The Morning Show, a heavily promoted Apple TV Plus series. That's when it hit me: I was kind of wrong about Apple and Disney Plus' strategy.

Last year, when both streaming services revealed they'd be releasing shows at a clip of an episode at a time, I was ecstatic. The status quo for streaming TV had pushed people to binge shows too fast in order to keep up with the conversation.

But in practice, at least for The Morning Show, the whole-season drop appears to have merits. In late December, more than a month after the show came out, my colleague Andrew E. Freedman started telling me how good the show had been getting.

Warning: This post contains spoilers for Apple TV Plus’ The Morning Show.

Hurt by a week start

When I left The Morning Show's premiere in NYC, I exited Lincoln Center on a positive note, having watched two pretty OK episodes. However, when I booted up Apple TV Plus on Nov. 4 to watch more, its third episode reinforced my concerns about the show's lack of direction and message.

In particular, the episode featured a scene where the accused workplace predator Mitch Kessler — played by Steve Carrell with his signature mix of stupidity and likability — was confronted with the realization that his friend Dick Lundry (Martin Short going heavy on the sleaze) was the kind of scumbag truly deserving of #MeToo headlines.

And since this was kinda-off-putting, I didn't feel a need to prioritize keeping up with the show on a weekly basis. It didn't help that this was a highly competitive fall season, what with The Mandalorian and Watchmen consistently delivering the goods. Who has time for a show that was threatening to give sympathy to a sexual predator when Baby Yoda and Dr. Manhattan are around?

Too little, too late?

I wasn't aware that The Morning Show was supposed to be a mystery of sorts, a "Did he do it?" as opposed to the "Will they or won't they?" nonsense of Friends. However, when episode 8 rolled around on Dec. 6 (more than a month after the show debuted), we got the big reveal, in a fantastic episode entitled Lonely at the Top.

It centers around the TMS team covering the Las Vegas shooting of 2017, and reveals a despicable action. Unfortunately, this episode arrived a whole month after the show debuted, which is like a year in streaming TV time.

In retrospect, knowing that the show was structured with this surprise makes sense. Yes, there's a big question about Carrell's character's innocence, and that could play upon the #MeToo trope where friends of the accused often defend them, saying he's not that bad.

The word of mouth that could have spread would have helped the show find an audience. Modern TV is all about people saying "don't worry, you'll love the big twist," or "trust me, it gets good." I've had friends tell me you need to watch the whole first season of The Good Place, to "get" it.

Maybe a big social media buzz would have helped The Morning Show at The Golden Globes, where it was shut out. Critics savaged most of Apple's shows early on, including The Morning Show, which got a 59% Rotten Tomatoes critics rating at first — it's since ticked up to 63%.

Apple's changing things up, and soon

Apple may have seen the light, though, as it's releasing its next big Apple TV Plus show — Mythic Quest, which is about life at a game development studio — all in one batch. The series bows Feb. 7, and if it can be a hit, maybe there's a chance Apple reverses course on its release schedules.