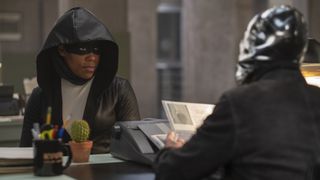 In the immediate shadow of Episode 9 of HBO's Watchmen, we're already begging to know if there will be a Watchmen Season 2. As you might expect, we're gonna dive into SPOILERS territory, so go finish Season 1 if you haven't already.

The big question I have about a Watchmen Season 2 concerns its plot. While the traditional process would be a continuation of the first season, there's an argument to be made that they could find another set of characters in the Watchmen world to explore.

Will there be a Watchmen Season 2?

At first, the answer was "probably." Now, that's not the case. USA Today talked to HBO programming chief Casey Bloys, who said that Watchmen show-runner Damon Lindelof (Lost, The Leftovers) declined to return. And since Lindelof is credited for much of the show's success, Bloys and HBO are not proceeding, with the exec saying "It would be hard to imagine doing it without Damon involved in some way."

Lindelof signaled this possibility when he told Variety that he was still trying to figure out if he'd come back, saying "I’m going to put up my antenna, see if it’s receiving anything. If it’s not receiving anything in a reasonable period of time … then I think we move on to your question, which is, if not me, then who?"

He also told USA Today that he's given HBO his "blessing" to pursue the show with a different team. HBO might take that option if the right show-runner pops up, as the finale drew a season high of 1.6 million viewers.

What would Watchmen Season 2's plot be?

According to Angela Abar herself, Regina King, the plot of a second Watchmen season is completely up in the air. Maybe it's on Mars, or is that a distraction? The actress told Vulture, "I know that [Lindelof] doesn’t even kinda have an idea of an entry point and an ending for a second season."

While a second season could foreseeably continue from the first, we don't see the Season 1 finale as ending on a cliffhanger — Lindelof told Vulture he believes that Angela doesn't sink to the bottom of the pool.

Do we have a Watchmen Season 2 trailer or release date?

Unfortunately, no — it's far too early. If you want more Watchmen, you'll need to go back and re-read the graphic novel, or re-watch the first season (both of which I plan to do).

Watchmen Season 2 cast: Who's in?

Regina King expressed an interest in returning, but she told Vulture that she wants the project to be just right: "I don’t want there to be a second season if it’s not going to at least be comparable to this first season, which is going to be really hard to do."

Thanks to the magic of flashbacks, anyone could return for Round Two, but let's start with the characters left on the board.

It's pretty safe to assume Lady Trieu (Hong Chau) is gone, but her daughter Bian (Elyse Dinh) is still in play.

Will we get Dr. Manhattan in the next season of Watchmen?

Unless he appears in a flashback, I doubt it. One of the hallmarks of HBO and Lindelof's run on the show is that actions have consequences, and the show has been done so well that they wouldn't want to ruin that good will by undoing the scenes in the finale.