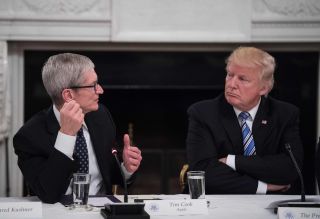 Apple is lobbying President Trump hard on why its products made in China should not be hit with 10% tariffs come Sept. 1, which will include the Apple Watch, AirPods and other products.

CEO Tim Cook had a dinner meeting with Trump on Friday night, and the president described what happened to the press. And it looks like there’s a chance Apple could see a reprieve.

"I had a very good meeting with Tim Cook," said Trump to reporters on Sunday, according to Bloomberg. "Tim was talking to me about tariffs. And one of the things, and he made a good case, is that Samsung is their number one competitor, and Samsung is not paying tariffs because they're based in South Korea."

Trump continued: "I thought he made a very compelling argument, so I'm thinking about it."

Tariffs on the iPhone, iPad, and MacBooks have been postponed to Dec. 15, but Apple is trying to gain momentum well ahead of that date. The iPhone 11 is expected to launch Sept. 10.

And there’s real incentive to gain traction on the Apple Watch and AirPods now. Sales of the Apple Watch grew 50% compared to the same quarter last year. Tim Cook revealed this during Apple’s Q2 2019 quarterly analyst call, as reported by Cult of Mac.

If Apple’s wearables business — which includes the Apple Watch and AirPods — were a stand-alone company, it would be in the Fortune 200, according to Cook.

As Bloomberg notes, Samsung builds its products in multiple countries, including China but also Vietnam and South Korea. The US signed a trade deal with South Korea last year, according to CNET, and electronics are free of tariffs. The Samsung Galaxy Note 10 Plus is one of those products, which goes on sale August 23.

Back in June, Nikkei reported that Apple was entertaining moving its product manufacturing out of China, but it's clear that Tim Cook does not want to go down that road.