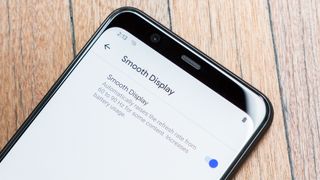 Google has released a software patch that fixes one of the first gripes about the much touted Pixel 4’s Smooth Display, which stopped being that smooth when you set the brightness went under 75%. However, the update brings another trouble.

Here’s a recap of what has happened so far with this “smoothdisplaygate”. Typically, most phones use 60Hz displays — which refresh the screen 60 times per second. There are display panels — typically used in TVs — that offer much higher refresh rates than that, which result in very smooth motion (which, incidentally, is annoying to many people because it can make films look like soap operas).

When Google launched the Pixel 4, it announced that the screen wasn’t the usual 60Hz but 90Hz. According to the company, the higher refresh rate of the Pixel 4’s new “Smooth Display” results in much higher video quality and smoother animations in the user interface. It’s true. The animation is a lot nicer and fluid.

Some Pixel fans got excited about this feature. But then they discovered that this high refresh rate will drop back to 60Hz if you set the phone’s brightness level under 75%. Users complained hard and, apparently, Google listened.

As reported by XDA Developers’ editor in chief Mishaal Rahman, the Android update being pushed to Pixel 4 and Pixel 4XL devices as we write these lines brings new thresholds to switch from 90Hz to 60Hz along with a November security patch. After applying the patch, Pixel 4 XL will have 90Hz at all brightness levels. Pixel 4, on the other hand, will fall back to 60Hz when you set the brightness level under 42%.

The higher refresh rate consumes more battery so Google is assuming that, if you set your brightness so low, you are trying to conserve power. Which kind of makes sense, especially knowing about the crappy battery life of the Pixel 4.

However, the update has caused a new problem, as Rahman reports in another tweet, relaying a message from Dylan Raga: “Only on the Pixel 4 XL when it's running at 90Hz and you turn off and on the display, it applies the wrong gamma table and the display looks ridiculously contrasty and very magenta-shifted." Here’s the comparison image, with the 60Hz on the left and 90Hz on the right.

Clearly, the second one looks way too dark and saturated. Rahman says that “the issue is more pronounced at lower brightness”. Both images are with the display at minimum brightness. In reply to those tweets, some users are saying that other high refresh phones have the same problem, like the Asus ROG 2 and the OnePlus 7T.

Back to the drawing board, Google. One day you will nail this down.