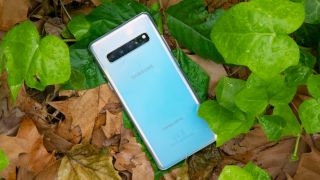 Health functions and apps are now a common sight on smartphones, giving information about how much exercise you’ve been getting or allowing you to track your diet. A recently discovered Samsung patent points to how health features could evolve in the future, possibly telling us what we might see on the Galaxy S11 or the successor to the Galaxy Note 10.

As discovered by LetsGoDigital, a patent granted by the US Patent Office to Samsung shows its idea to insert a spectrometer into a smartphone. A spectrometer produces light across both the visible and invisible parts of the spectrum, and can detect the chemical composition of an object it’s pointed at by noticing the change in the frequency of the reflected light. The patent here includes a diagram showing the spectrometer-armed phone examining how much sugar there is in fruit.

The practical capabilities of a smartphone spectrometer are evidenced by the Changhong H2, a prototype phone that also used a spectrometer that wowed visitors to CES 2017. Using a Scio molecular sensor, made by Consumer Physics, this device could measure sugar content of fruit too, but it was also able to read the moisture present in your skin, body fat, and the chemical composition of pills or alcohol content of drinks.

Sadly this phone apparently never made it to production, but it’s a great indicator of what this technology can do when it’s added into a smartphone.

While the hardware sounds like it has amazing potential, there are a couple of caveats. First off, this is a patent, meaning that it could be a few years before it becomes a reality on Samsung’s phones, if it ever arrives at all. Secondly, unless Samsung or another company manages to develop this technology in house, it’s going to need to be a large-scale collaboration in order to make the spectrometer work in all the potential ways we’ve heard about, let alone with third-party apps.

While we can dream that this will be the defining feature of the S11, chances are we’ll be waiting a lot longer before we see this patent come to life.

If you want to learn more about what’s known and rumored for the next big Samsung smartphone launch, our regularly updated Galaxy S11 rumors hub page will get you up to speed.