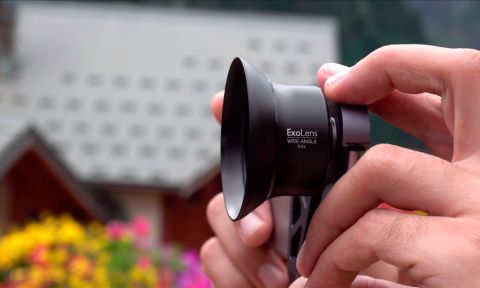 The Zeiss ExoLens Pro wide angle is an excellent-quality lens, but it is large and expensive.

The ExoLens Pro is a pro device in a number of ways: It is big and expensive, and it produces excellent images. It widens the view of the iPhone camera, but without adding the distortion that other wide angles like the olloclip active set introduce. But it's also much more expensive than other iPhone lenses.

Zeiss offers a number of different lenses in its pro line, including a $199.99 telephoto and a $149.99 macro zoom. These use the same mounting system as the wide-angle lens that we tested. The ExoLens Pro also comes with rubber inner sleeves that adapt it for a range of iPhones. This Zeiss lens was launched before the iPhone 7 Plus was released, so there's no rubber sleeve for the latest and biggest iPhone in the box. The manufacturer Fellowes will send the rubber sleeve adapter to buyers for free, though. ExoLens also offers a case with a built-in lens attachment and a bracket that spreads the weight of the lens across the camera body.

The quality of the images that the lens captures justifies its size. The wide angle increases the angle of view of the iPhone's built-in lens without introducing distortion into the image and without introducing any other image-quality problems. The images we captured had the same excellent sharpness and color as those from the iPhone 7 Plus camera on its own. Even at the edges of the frame (where cheaper lenses tend to get blurry), the images from the Zeiss remain sharp and clean, with excellent detail.

Cheaper add-on lens systems are much smaller and lighter and are quicker to swap out. The screw-on design of the ExoLens Pro system takes some time to remove. The lens holder also blocks the second camera of the iPhone 7 Plus and the LED flashes on all iPhone models.

At just under $180, Zeiss' lens is much more expensive than the others we've reviewed. For that price, you could buy the olloclip Core lens set and the Macro Pro set, which provide far more creative potential for the aspiring photographer. So, unless quality is the absolute biggest concern, most iPhone photographers should spend their money elsewhere.