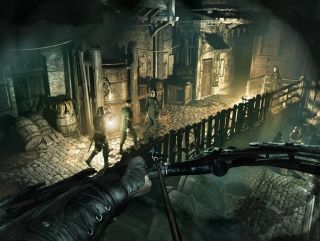 NEW YORK — Making a stealth game is hard enough, but rebooting a beloved stealth franchise is even more difficult.

"Thief," Square Enix's upcoming reboot of the classic franchise of the same name, is a fairly marked departure from the games that preceded it, but it still maintains a lot of what made the series so beloved.

Tom's Guide had a chance to go hands-on with "Thief" at a recent Square Enix event. While this reboot takes many pages out of other modern stealth games' playbooks, it was still an entertaining demo that let series protagonist Garrett do what he does best: Steal things and stay hidden in the shadows.

Class warfare is one of the big themes in "Thief." A plague is sweeping across The City, and while the wealthy can ride it out in relative comfort and security, the poor must endure both sickness and callous treatment at the hands of the police.

Garrett does not take a particular interest in the rich-versus-poor proceedings, but as the story progresses, he encounters both sides of the struggle and learns his own role in The City's ongoing political intrigues.

Or not — it was entirely feasible to play the whole demo without alerting or combating a single enemy. If past experience is any indication, the full game will offer the same options.

Garrett begins in his hideout, which houses a number of empty trophy cases. As Garrett explores his Victorian London-inspired city (called, simply enough, The City), he can fill in the hideout with a variety of jewelry, artwork and other valuables.

For the time being, though, the only course of action for us was to head out into the night.

As Garrett ran along rooftops under the light of a full moon, eavesdropping on the conversations of passing policemen below, we learned about the three main things players will have to keep an eye on during the game.

Garrett has three gauges in the lower-left corner of the screen: One monitors health; one monitors focus, which lets him see important objects and characters, such as switches and policemen; and one keeps track of how exposed Garrett is to light.

Keeping Garrett in the shadows is the ticket to success in "Thief." As long as he moves slowly and silently and sticks to dark corners, the nosy policemen enforcing a citywide curfew won't hear a thing. This allows Garrett to sneak across a heavily patrolled city square and meet with a contact who tasks him with a series of odd jobs.

Navigating the world takes a little practice, but once a player gets used to the complex control scheme, it's easy enough to have Garrett vault across ledges and drop onto narrow beams.

Holding down the left trigger allows Garrett to free-run across the environment, which is a noisy but efficient way to get around. It's also a fairly simple way to take a lethal two- or three-story face-plant if jumps aren't carefully measured.

Upon reaching the contact, Garrett can take on a number of jobs and tackle them in any order.

We tried our hands at a bit of art theft first. Garrett had to hop across the city undetected, break into a nobleman's house and liberate a rather expensive painting.

In order to complete the jobs, Garrett needs equipment, and this is one area in which "Thief" excels. Players can purchase arrows — both of the deadly and knockout varieties — and items to restore health and focus, but the real fun comes with some of the more unusual stock.

Rope arrows can suspend climbable ropes all around The City, allowing Garrett to reach new areas (such as the nobleman's window, where snatching the painting was a cinch). A pair of wire cutters and a ratchet allow Garrett to enter new areas by clipping steel wires and unlocking winches and air ducts.

With its slick, fast-paced gameplay and light touch of magical elements, "Thief" feels more like Bethesda's 2012 stealth hit "Dishonored" than a traditional "Thief" title. Even so, its hardcore stealth mechanics and intriguing city to explore will go a long way toward pleasing stealth fans.