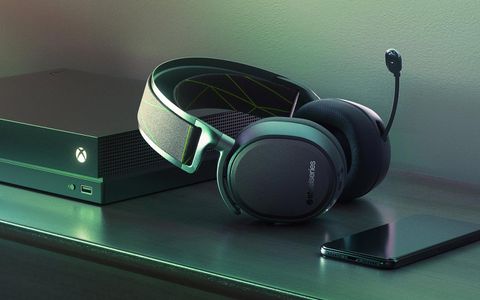 The SteelSeries Arctis 9X provides great sound and a comfortable fit, but almost every new design decision comes with a drawback.

I don't know why, but getting a gaming headset up and running on the Xbox One has always been a little arcane. You have to mute your TV, or you'll get two simultaneous audio streams. You can't plug in a wireless dongle, like you would on a PC or PS4. Back when the system first debuted, you actually had to buy an adapter to plug a headset into the controller, because Microsoft did not see fit to include an audio jack. In other words, Xbox headsets, even the good ones, are always going to be a little idiosyncratic.

In that respect, the SteelSeries Arctis 9X ($200) is a perfect microcosm of wireless Xbox headsets. It provides great sound and delivers SteelSeries' signature comfortable fit, but almost every design decision that makes it Xbox-compatible comes with some kind of drawback. It's a pain to sync, its buttons serve too many functions and it's surprisingly expensive for a gadget that won't work out of the box with every system you own.

If you're an Xbox gamer who needs a comfortable wireless headset — and you have some cash to burn — the Arctis 9X is an easy enough recommendation. But we've also seen SteelSeries make more versatile headsets for less money.

The Arctis 9X looks a lot like other recent SteelSeries headsets. It has large, plain black ear cups and an adjustable headband underneath a rigid metal arc. SteelSeries calls this a "ski-goggles" design; I call it one of the most comfortable fits on the market. There's no toying around with notches or metal bars; you just put it on, perhaps adjusting a Velcro strap a bit, and it fits. This time around, the strap has a tasteful pattern in Xbox green, but it's perfectly wearable outside the house.

On the right ear cup, you'll find a retractable, flexible mic in the front and a chat/game volume dial in the back. The left ear cup has a volume dial, a mic mute button, a Bluetooth button and a power button in the back as well as a micro USB charging port and a 3.5-millimeter audio port on the bottom.

What's strange about the audio port on the Arctis 9X is that it's just a plain 3.5-mm connection — and the headset doesn't come with a cable. Previous Arctis models have used a proprietary connection on one end, with a regular 3.5-mm jack at the other end, and these cables have always come right in the box. Since the Arctis 9X offers Bluetooth, you may not really need this cable for your mobile phone, but it's helpful for a Switch, or a PS4 controller, or any older device you may still have in your tech arsenal. And it's not as though 3.5-mm audio cables are expensive, but for $200 up front, it feels like something that SteelSeries should have included.

On the bright side, there are no dongles to worry about. The Arctis 9X connects wirelessly to the Xbox via Microsoft's proprietary protocol and to most other devices via Bluetooth. This is probably one of the reasons why the Arctis 9X is so expensive; whether or not it's worth the premium will depend almost entirely on how much you use your Xbox One.

SteelSeries continues to dominate the headset market when it comes to comfort. Thanks to its elastic headband, you're almost guaranteed to get a perfect fit every time you don the Arctis 9X. With a lightweight design and an even weight distribution, it's easy to wear the Arctis 9X for hours at a time, whether you're listening to music at the office or immersed in a great game at home.

I handed off the Arctis 9X to a co-worker, who said that it was comfortable and easy to wear for long periods of time. However, he also pointed out that his ears are larger than average, and he had some trouble getting the ear cups to make a tight seal around the top.

The Arctis 9X performs admirably with all sorts of Xbox games. From the strategic supervision of Wargroove, to the fast-paced, first-person shooting of Doom, to the side-scrolling stylings of Dead Cells, to the furious fighting of Injustice 2, the Arctis 9X provided beautiful, clear, clean sound. I heard every demonic roar in Doom and every battlefield cry in Wargroove. The characters' voices carried the interesting story of Injustice 2, while the atmospheric music in Dead Cells helped underscore the eerie level design.

You can also hook up the Arctis 9X to a PC, either via Bluetooth or an Xbox Wireless Adapter, where it performed just fine with titles like StarCraft: Remastered. It's worth noting that you can indeed run Bluetooth and Xbox audio simultaneously, in case you'd like to funnel in music or take a phone call while you level grind.

Thanks to a strong, clear microphone and an easily accessible voice chat/game volume dial, the Arctis 9X is also a perfect companion for multiplayer matches. Changing the chat/audio balance is as simple as rotating a dial, and you can mute or unmute the mic with a simple button press. You don't really need to make use of the chat and mic options if you stick to single-player games, but they're extremely intuitive if you decide to experiment with them.

The Arctis 9X's most important feature is its out-of-the-box wireless connectivity with the Xbox One. As stated above, most headsets simply do not offer this feature, and it's excellent to see SteelSeries finally offer something specifically for Xbox gamers.

The only problem is that the connectivity is not perfect. It's not bad — it's just not wholly reliable, either. I first used the Arctis 9X in my office, where I experienced a laggy signal that cut in and out every few minutes. After restarting the system and testing my networking connection, the issue abated, but it didn't go away completely.

Things improved considerably once I took the Arctis 9X home, but even then, every once in a while, the sound would briefly cut out, or there would be an unexpected pop or hiss. I'm not exactly sure what causes this, since SteelSeries has had nearly flawless wireless functionality in its other headsets, so perhaps it's something endemic to Xbox protocols. Even so, while using the Arctis 9X at home should be fine, I wonder how it would fare in a convention or tournament space, crowded with wireless signals.

I contacted SteelSeries about the issue, and learned that this issue occurred in very early models of the headset, but had since been (supposedly) ironed out. The company sent me another model, which fared a little better than the first. But there were still occasional bursts of fuzziness on PC, and disruptions in Xbox game sound (especially in Wargroove, for whatever reason).

In fact, the Arctis 9X's wireless features introduce a lot of issues for the device. In order to connect it to an Xbox One, you have to press and hold the power button for a certain amount of time from a powered-off position. If you don't hold it for long enough, you have to turn the device off and start over again; if you hold it for too long, the Arctis 9X simply powers off again. It's not something you'll have to do often, but a separate pairing button would have really simplified things.

The power button is also the only way to move through four equalization modes: normal, bass boost, treble boost and voice boost. Once again, finding the perfect balance between "changing modes" and "turning the Arctis 9X off completely" is not always intuitive.

SteelSeries has advertised that the Arctis 9X can last up to 20 hours on a single charge, although it's very hard to gauge this. There's no way to look at battery levels, save for the Xbox One's built-in, vague notifications, such as "Medium" or "Low." It lived through a workday and an afternoon gaming session with no issue, however, so battery life should not present a huge problem. Even if you connect the Arctis 9X to a PC via an Xbox Wireless Adapter, it's not compatible with the SteelSeries Engine 3 software, so don't expect any deep tweaking options.

Once you've paired it with an Xbox, starting up the Arctis 9X will also start up the console, just like an Xbox controller. But this isn't necessarily a very helpful feature if you also use the Arctis 9X via Bluetooth for your PC or mobile phone. More than once, I had to start up the headset and scramble to turn off my Xbox before starting work for the day. Again, this is where another button might have come in handy. Unless you're playing games on the Xbox and doing nothing else, the Arctis 9X can feel surprisingly clunky to use.

I tested the Arctis 9X with music from Flogging Molly, Old Crow Medicine Show, the Rolling Stones and G.F. Handel, and it sounded great across the board. The default equalization profile has a beautiful balance between treble and bass, and both instruments and voices came through clearly. The soundscape was bright and nuanced, and if the Arctis 9X were my everyday set of music headphones, I think I'd be very happy with my choice.

The Arctis 9X is also perfectly suitable for use outside the house. The ear cups can swivel, making the headset easy to stash in a backpack. Furthermore, with its black chassis and retractable mic, the headset feels right at home on a subway, bus or airplane.

And yet, for all it gets right, the Arctis 9X can feel surprisingly frustrating at times. Whether it's the multifunctional buttons, or the vague battery indicator, or the lack of customization options, the Arctis 9X just doesn't feel as complete or as intuitive as, say, the incomparableSteelSeries Arctis 7 ($150).

As far as wireless Xbox One headsets go, I prefer both theTurtle Beach Stealth 700 ($150) and theLucidSound LS35X ($180), which are both a little cheaper and have better physical designs and Xbox wireless connectivity. But the Arctis 9X certainly has raw comfort and sound quality going for it, and those are hard to dismiss.