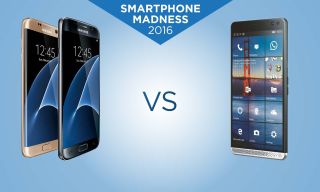 Editor's Note: Voting has ended in this match-up, with the Galaxy S7 and S7 Edge claiming a hard-fought victory. Samsung's phones took 54 percent of the vote to top the HP Elite X3, which captured 46 percent. The Galaxy S7 and S7 Edge are now in the next round, which begins later this month. Voting continues in the rest of the first round.

Today's Smartphone Madness Matchup pairs up a phone boasting the kind of photo features you normally find in a high-end DSLR with another phone that hopes to replace your laptop. Samsung's latest flagships, the Galaxy S7 and S7 Edge, face off against HP's office-centric Elite X3.

There's more to the new Galaxy S7 than just camera improvements. We are talking about a pair of water-resistant phones powered by a speedy Snapdragon 820 processor after all. But the dual-pixel technology in both the S7 and S7 Edge is a first for smartphones, enabling your camera to focus faster so you won't miss any fleeting shot. Larger pixels and a wider aperture also mean that both phones will capture better images even in low light. We think the S7 Edge has the best camera of any smartphone, but is that enough to push Samsung's flagship to victory.

MORE: Read Our Review of the Galaxy S7 Edge

Perhaps not, if you're tired of toting around both a smartphone and a laptop. HP's Elite X3 boasts the kind of specs — a Snapdragon 820 CPU, 4GB of RAM, and a 4,150 mAh battery — that will let you leave that laptop behind. The Elite X3 can also survive a dip in the water and it boasts military-grade durability as well. This Windows 10 also makes use of the Continuum feature to deliver a desktop-like experience from a smartphone.

MORE: Read Our Hands-On with the Elite X3

It's shutterbugs versus road warriors, and you get to decide who finishes on top. You have until 9 a.m. ET tomorrow (March 15) to give a thumbs up to either the S7 and S7 Edge or the Elite X3. The winning phone will join the iPhone 6s in the next round, after Apple's phone cruised to victory against the Acer Liquid Jade 2 with nearly 82 percent of the vote.