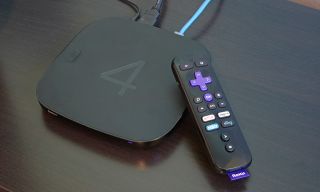 In recent years, set-top boxes from Roku, Apple, and Amazon have saturated the streaming media market. However, even in a crowded arena, the Roku 4 deserves your attention. Not only can this unit stream 4K content — a feature that even the priciest Apple TV players lack — but it also offers more channels, more framers per second, and an overall better experience than its predecessors. For a limited time, Amazon is also taking $40 off its list price.

The Roku 4 is a beast of a set-top box. It measures 6.5 inches all around, compared to some of its competitors which barely hit 4.5 inches. Nevertheless, its flat profile and black exterior ensure it'll blend in with your A/V equipment.

In our review, 4K video looked phenomenal on the Roku 4. That's because unlike the Amazon Fire TV, the Roku 4 supports 4K content at up to 60 frames per second. It also has the greatest line up of channels including heavy hitters like Netflix, Hulu, Amazon Instant Video (missing on Android TV platforms and Apple TV), Pandora, Spotify, and YouTube.

Whereas the Amazon Fire TV doubles as a gaming console for the casual gamer, the Roku 4 seems to buck that trend and focuses mostly on content. The few games it does support are half-hearted knockoffs that aren't memorable. However, for content and performance, the Roku 4 is the videophile's pick.