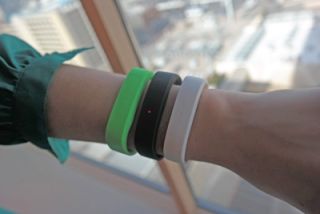 LAS VEGAS - The $49 Nabu X is part fitness tracker, part smartwatch and part social connector, offering more features than other budget wearables like the Misfit Flash and Jawbone Up Move. Here at CES 2015, I had a chance to go hands-on with this device, which feels comfortable and does a lot for not much money.

While the original $99 Nabu smartband has a full OLED display that showed you snippets of notifications like text messages and email, the Nabu X does away with that screen entirely and opts for a multicolored light system. The LED lights can be customized to illuminate for specific notifications, like texts and emails, and they light up to show you your daily step goal percentage. While it’s a much more simple system, it allowed Razer to knock the Nabu X’s price down to $49.

Like what you see here? Vote for the Razer Nabu X in our Readers' Choice awards at CES 2015.

The cheaper price doesn’t mean Razer compromised with the Nabu X. I was impressed with how comfortable the Nabu X’s silicon strap was when I tried it on at CES 2015. It was easy to clasp and felt natural on my wrist. I also love the available wristband colors; the first to ship will be the classic black, followed by the white band with gold accents and Razer’s signature bright green band.

As an activity monitor, the Nabu X tracks steps, calories, distance and sleep along with its companion app for iOS and Android (Windows soon to come). One nifty feature with its sleep tracking is that you can set the band to either automatically go into sleep mode, or wait for you to manually enter sleep mode. Other fitness trackers, such as the $49 Jawbone Up Move and the $49 Misfit Flash, don’t let you choose - you must manually enter sleep mode on the Up Move and the Flash automatically tracks when you fall asleep.

The Nabu X has the same social features as the original Nabu does - when your Nabu X is close to another Nabu band, it can pick up its signal and communicate with it, sharing gaming, fitness and other information that you’ve set in the apps you have paired with the device. While Razer has a few apps for the Nabu smartbands in its Nabu Marketplace, the company is working with third-party developers to expand the selection.

With the Nabu X, Razer is enters the highly competitive affordable fitness tracker market, but it appears to be a strong competitor. Stay tuned for our full review in the coming months. Razer will release the Nabu X to qualified Razer Insiders on January 13 at an exclusive price of $19.99 before the band goes on sale to the general public for $49 later this spring.