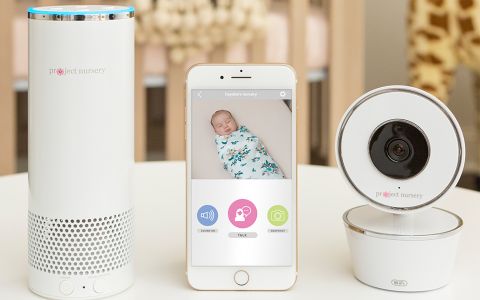 Project Nursery's baby-monitor system pairs a solid camera with a privacy-minded smart speaker, so you can use Alexa for control instead of relying solely on smartphone apps.

Alexa is ready to help out in your nursery. But is your nursery ready for Amazon's voice-powered assistant?

If it's in the form of Project Nursery's Smart Nursery Baby Monitor System with Alexa, the answer is yes. The voice-powered assistant is a welcome addition to a solid baby monitor system, giving you a way to check in on your child using a few simple vocal commands. And the way Project Nursery incorporates Alexa into its camera system should alleviate any privacy concerns you have about an always-listening speaker. We think it's one of the best baby monitors you can buy, particularly if you live in an Alexa-connected home.

Project Nursery sells its Smart Nursery Baby Monitor system in a $229 package that includes both a 5.7 x 3.8 x 3.8-inch HD video camera and an Amazon Echo speaker. If you already have one of Amazon's Echo products, you can choose to just buy the stand-alone camera, which coasts $149; it has built-in support for Alexa voice controls.

Project Nursery's sleek, white camera is motorized, so it can pan 270 degrees from side to side and tilt 120 degrees up and down. That helps you get just the right view of the baby's room, and you can mount the camera to the wall as well. Adjusting the angle is as simple as swiping on the live view within the app on your Android or iOS device.

With no battery support, the Project Nursery camera must stay plugged in at all times. There's a microSD card slot with support for up to 32GB that's used for storing photos and videos. That means no cloud-storage fees like the ones other baby monitor makers sometimes charge for storing video. So, once you buy the Project Nursery system, you're done spending money.

To start the pairing process between the camera and your phone, you'll use the Project Nursery smartphone app to scan a QR code on the camera's bottom. Then, enter your Wi-Fi credentials into the app, which creates and displays another QR code on your screen. Hold that code up to the camera to scan; a voice from the camera will tell you when it's been read successfully. After another minute, the camera will join your Wi-Fi network. The process was painless, and the camera stayed connected throughout my testing, never dropping the network once.

I reviewed the $229 bundle, which includes a smart speaker, a tall, white cylinder that looks a lot like a regular Amazon Echo. It's got the same buttons on the top, plus a color-changing ring that lights up when you say, "Alexa." But the front of the speaker that Project Nursery includes two more buttons: a power button that lets you turn the entire speaker off, including the microphone, as well as a button that lets you switch from Wi-Fi to Bluetooth mode. You can do this if you ever want to use the monitor as a regular old Bluetooth speaker.

I'm crazy about those additions. The on/off button is a little redundant, because this speaker, like all Echo devices, has a microphone mute button on the top that disables the microphone (and stops the speaker from responding to the wake word "Alexa") until you press it again. In households like mine, where some of us get a little creeped-out by the idea of an always-listening microphone, we appreciate the assurance the speaker is really off, without having to unplug the entire thing. Bluetooth mode is also a nice touch, giving this smart speaker extra versatility around the house.

The Smart Nursery camera and smart speaker both support Alexa, one of the key features of this bundle. Alexa integration lets you control many functions of the camera itself with your voice, from whatever room the smart speaker is in. So from the Echo speaker in your living room, you can control the camera in your nursery, glancing at images streaming from the nursery to your smartphone; if you have speakers in other rooms, you can control the camera from those places, too.

First say, "Alexa, open Project Nursery," then you can use your voice to pan or tilt the camera, take a photo or start recording video, turn motion detection and temperature alerts on and off, play a lullaby or pink noise, check the temperature, or ask when sound or motion was last detected. You can use the rest of Alexa's skills to, say, reorder diapers and wipes, set a timer, and log feedings and naps. This all worked well in my testing once I got the syntax right. I had to say, "Check the temperature on the nursery camera," including the device name.

The system's Wi-Fi-connected camera uses its Alexa integration well. Once I started using my voice to start and stop monitoring and to play songs from the camera's speaker, the whole family came to appreciate Alexa more than ever — and we left the smart speaker powered on more often. Other Alexa features (news, weather, music, shopping lists, reminders, calendars, and on and on) are available through the speaker, too, and add extra value; they might just keep you using this system even after you've outgrown the need for a baby monitor.

There's one downside to this integration. Managing all the features requires multiple apps. The Project Nursery Smart Camera app shows the camera's feed and lets you adjust its settings. The Project Nursery Smart Speaker app lets you play music on the speaker in Wi-Fi mode, including songs saved to your phone's own library and online sources like TuneIn radio, iHeartRadio, Spotify, Tidal, Napster and Amazon. Then, you have to install the regular Alexa app, too, for linking the smart speaker to your Amazon account. While it's clear which functions each app is responsible for (and the apps are mostly well-designed and easy to use), this is not a seamless experience. And the Smart Speaker app could use a face-lift.

Project Nursery's camera app supports up to four cameras, and you can also share the live feed with friends if they install the app on their own devices and then scan a QR code from your phone. The app can alert you to motion, sound and room temperature changes. I did get a few false-positive motion alerts with the sensitivity setting on default, probably from sunlight casting shadows. The app lets you exclude some areas of the field of view from motion detection, so you can focus on your baby's crib or bed. I loved being able to turn motion and sound detection on or off by asking the smart speaker to do so — it's much more convenient than having to dig into the app settings.

The camera includes three preprogrammed instrumental lullabies (in the Rockabye Baby style) as well as the sound of rain, waves and pink noises. They're all fine, but I wish I could add more songs, create a playlist or even have the sounds switch off after a set time. Right now, the app simply plays whatever sound or song you choose nonstop until you turn it off, either in the app or by asking the smart speaker to "turn off the sounds on the nursery camera." A night-light feature would be a nice addition too.

Two-way audio lets you speak to your baby over the camera's speaker by holding a button in the smartphone app — to let a crying child know you're on your way, for example, or to tell the cat to stop licking the baby's head.

The Smart Nursery camera has good night vision, which turns itself on and off automatically or can be enabled anytime in the app. Motion and sound detection can trigger video recordings of 30, 60 or 90 seconds in length, and buttons on the camera's live view let you take a snapshot or start a recording whenever you like.

The camera records in 720p, not 1080p, but videos looked crisp and detailed enough for a nursery camera. There's very little lag between the app and the camera when you're panning and tilting, turning the sounds on and off, or taking a snapshot or video.

False-positive motion alerts were the main drawback in my testing. I got a handful (one or two per day at the most) when there was no one in my son's room. Again, the culprit was probably light from the window casting shadows, but on the snapshots and recordings, I had a hard time figuring out exactly what the camera saw as motion. Still, I could tell the smart speaker to turn the motion detection off during the day and then back on at nap time and bedtime.

Alexa integration is solid, too. Being able to ask for the temperature in the baby's room is my favorite feature. The app gives notifications when the temperature is above or below a set range too, but getting a precise temp from Alexa felt very space-age. I even started using Alexa to play one of the camera's lullabies to wake my son up in the morning.

The smart speaker adds a lot of value to the Smart Nursery bundle, and the camera is versatile enough that you could keep using it as an indoor security camera once your need for a baby monitor goes away. Being able to control common camera features by voice also lets older siblings and other family members get involved — by turning on motion detection or playing a lullaby, for example — without having to reach for a smartphone app.

The Project Nursery system lacks the humidity sensor and color-changing nightlight found in our top baby monitor pick, the Arlo Baby, but its clever Alexa integration and inclusion of a smart speaker make this bundle easy to recommend.