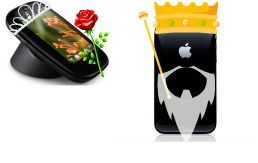 Arriving late in the game isn’t always a bad thing. After all, some of us remember how the mighty PalmPilot series emerged from the ashes of hand-held computer attempts by Go Corp. and Apple. In retrospect, it’s hard not to glance from the Apple Newton to early Palm models and think, “Huh, that sure looks similar.” The Palm Pilot launched in 1996, three years after the Newton arrived. Both were personal digital assistants with touch screens and integrated handwriting recognition, which was the uber-feature of the day. Regardless of the internal and external factors that doomed the Newton, the precedent was set. It was possible to take Apple’s ideas, improve and optimize them, and achieve commercial success.

Fast forward. Research in Motion’s BlackBerry Curve may be the U.S.’ top-selling consumer phone of the moment (according to the NPD Group), but there’s no question that Apple now has the “it” phone for the latter half of this decade. I don’t need to rehash the iPhone here. You know its core attributes: sexy candy bar design, touch screen, gesture-friendly user interface, Internet client, WiFi, iTunes platform, and the App Store. Over 17 million have been sold since its launch in mid-2007.

Two years later, we have Palm returning for a rematch. While Apple seems unable to misstep for the last few years, Palm’s destiny appears to have been diminishing. The marriage of Palm with Windows Mobile on the Treo series has been anything but riveting, and the best thing one might say for Palm’s Centro, the last gasp for the old Palm OS, is that it’s cheap. But if you can buy a BlackBerry Curve for $99 on a two-year contract or a Centro for $49 on a three-year, well...suffice to say I’m wearing a Curve on my belt as I type this.

A look at Palm’s annual income statements paints a similar story. For 2006, net income hit $336 million. The following year it dropped to $56 million—mind you, this was before the recession hit. And 2008 showed a $110 million loss at a time when the company’s total assets have dropped from nearly $1 billion to only $540 million and there’s a new $394 million entry in the long-term debt column. Clearly, Palm needs a major hit, and the company needs it fast. All hopes seem pinned on the Pre.

Can the Pre deliver? Or is it already too late?